She´s not a musical person and she can’t play guitar. She just likes to hold the one Mari left behind.
- I really should return this. But she hasn’t asked for it… 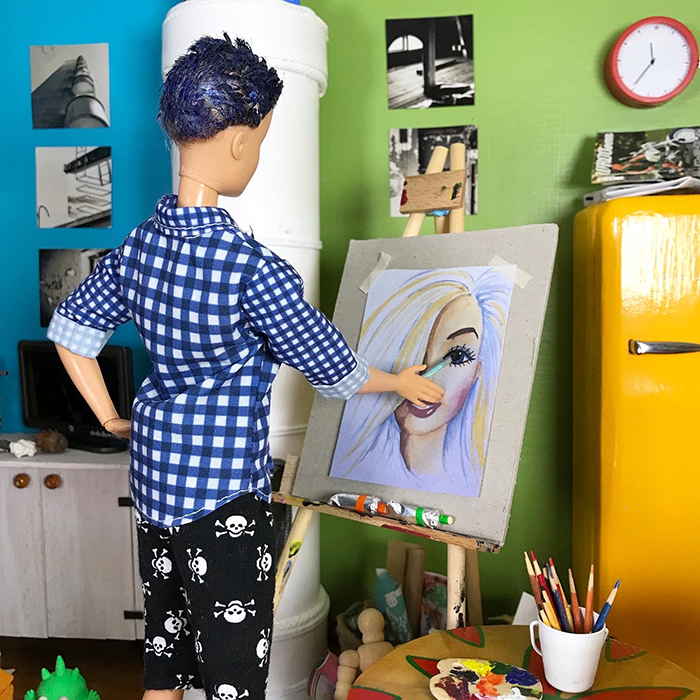 Kaarna tries to paint a portrait of Mari, but ends up hating herself. 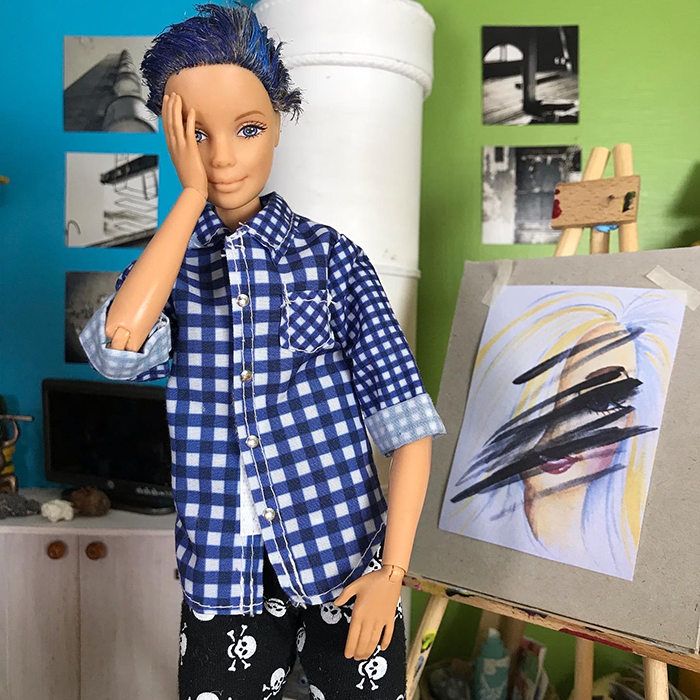 - It’s like I can’t even paint anymore! What is this shit I’m creating?! She’s the most beautiful thing but I’m not able to capture that!!!! 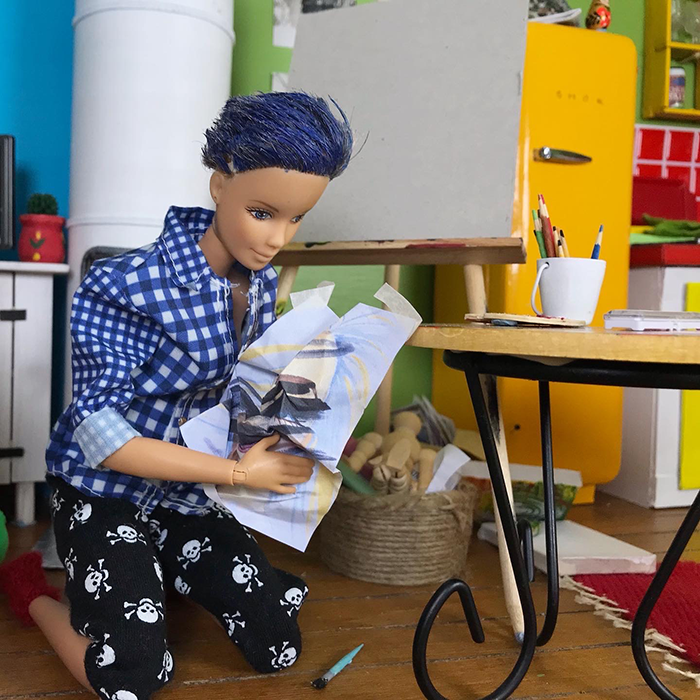 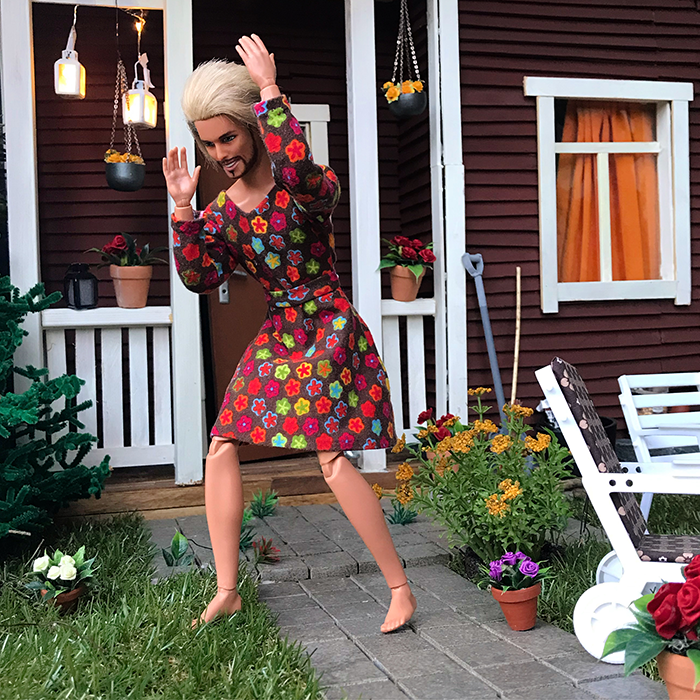 Ken would love to relax on the hammock after work, but the heavy rains combined with the warm air have turned his garden into a paradise of mosquitoes. 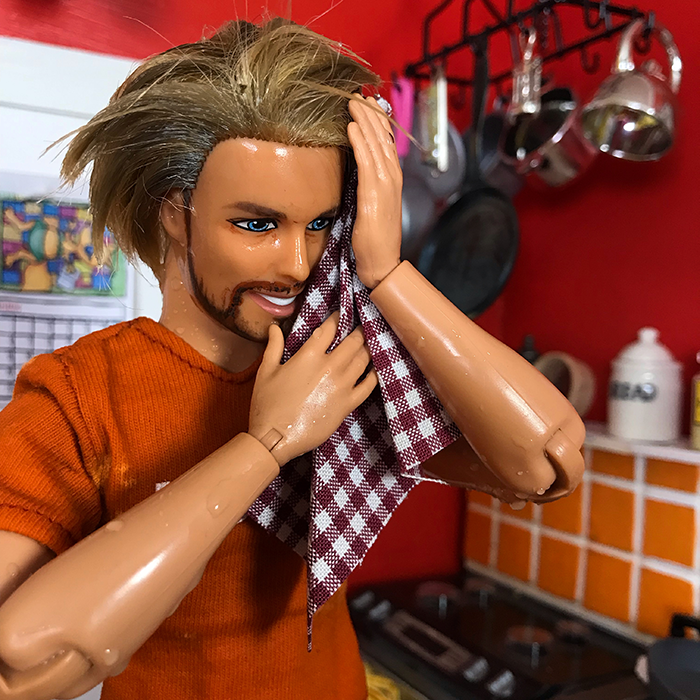 Just when it looks like a sunny day, a thunder storm hits. Ken tries to stay positive, but he has started to understand the downsides of being a postman. 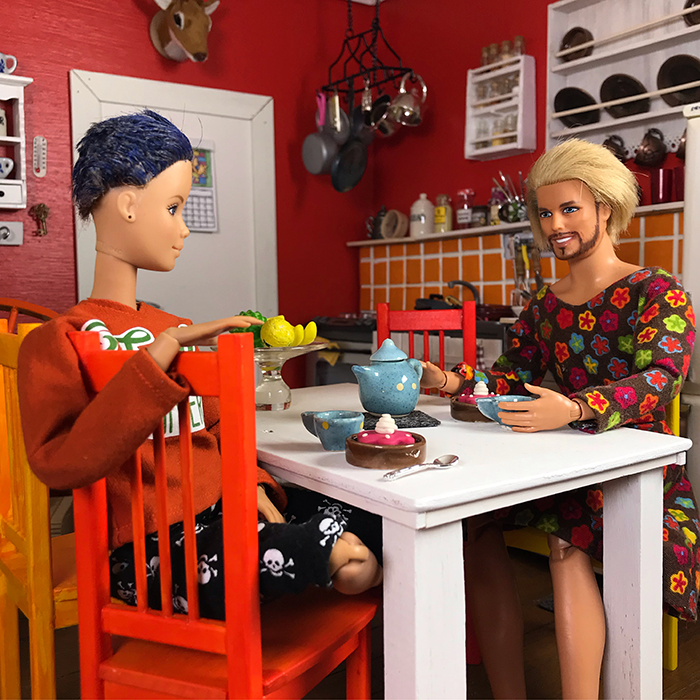 The days go by and Ken is more and more tired and Kaarna more depressed. Ken pours tea on their cups and says:
- Is this really how we want to spend the summer…? Me working and you crying? 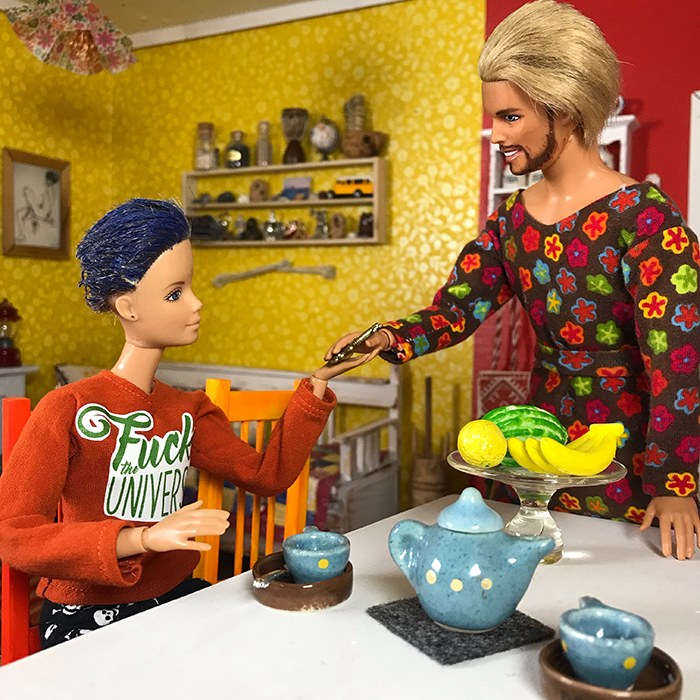 - Here, take Herbert’s key. When I’m at work tomorrow, check the oil and fill up water canisters. And pack the usual stuff. We’ll drive the minute I get home.
- What about your work? What about money?
- We’ll use my credit card when we run out of money. And at work I can choose my own hours. Right now I choose life.
- That’s so unlike you! So strangely irresponsible of you!
- I can be a responsible middle aged person again in the winter. Now I want to be a wild and wandering hippie. 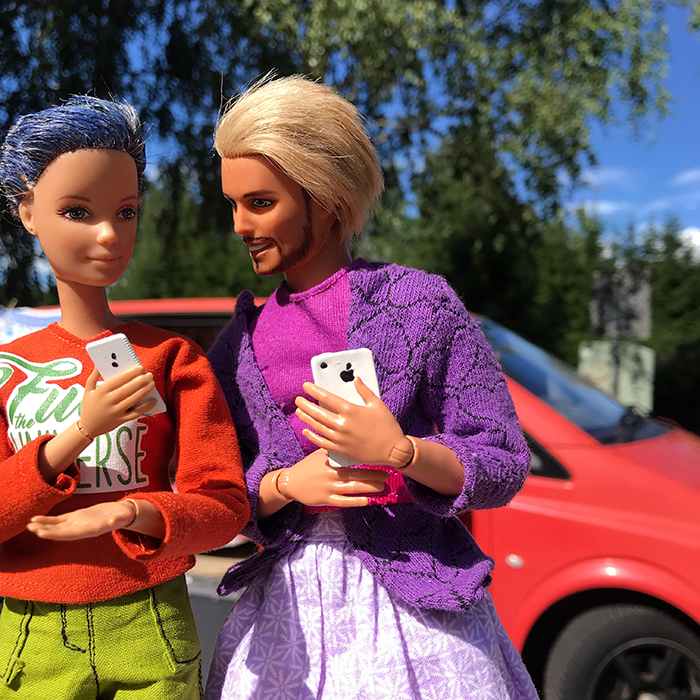 The first morning on the road is beautiful. Ken wants to drive around Lake Päijänne, but the weather forcast suggests something else.
- It’s 14 degrees and raining up there! Seriously Ken, let’s go after the sun!
- I agree. Looks like we should stay here today and head to the south tomorrow. 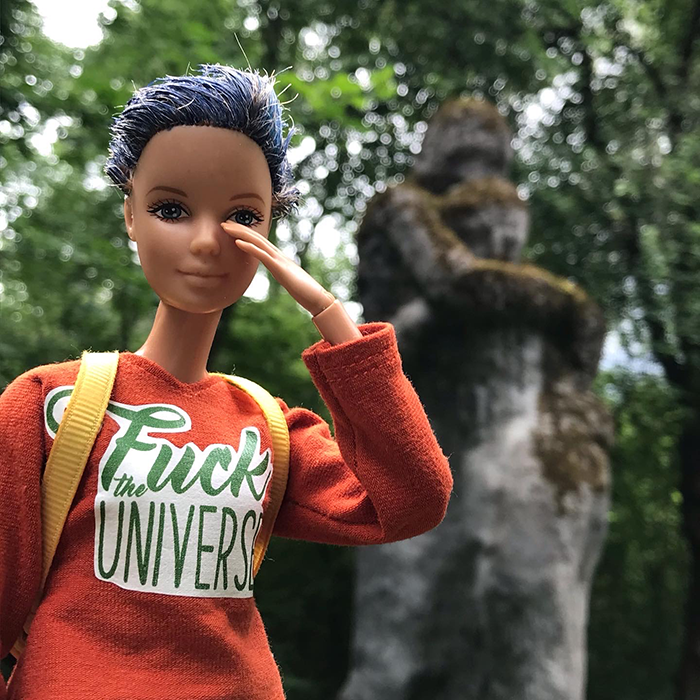 Kaarna walks in Lanupuisto. It’s a wonderful park with powerful statues by Olavi Lanu. They make Kaarna feel lonely though. 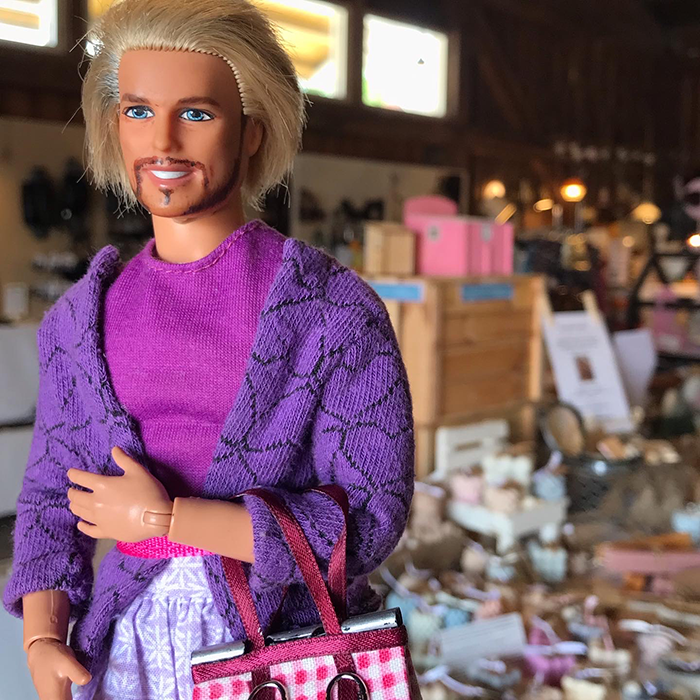 Meanwhile Ken rests his feet at a crafters’ pop up shop. 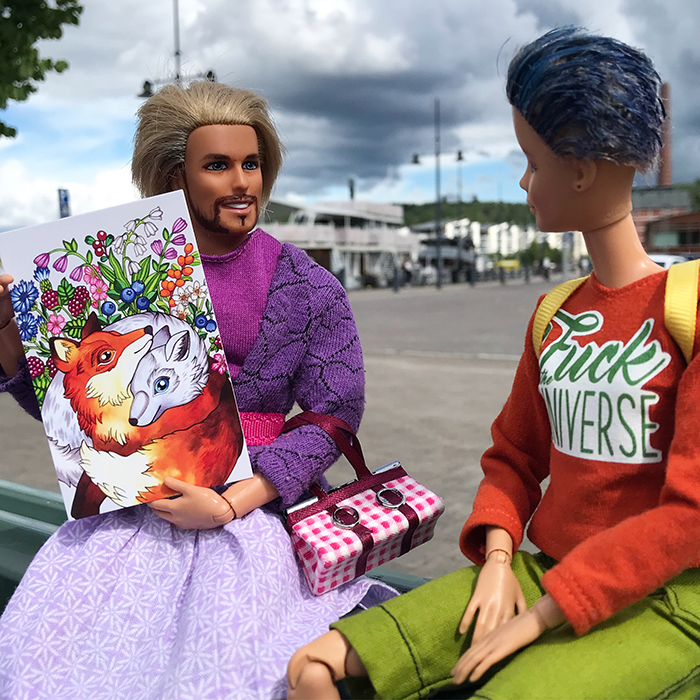 He shows Kaarna a beautiful poster by Inka Ruska that he bought. Kaarna sighs:
-Everybody else is so talented and successful… I need to take a break from art, it just makes me feel I’m the shittiest of all the shit. 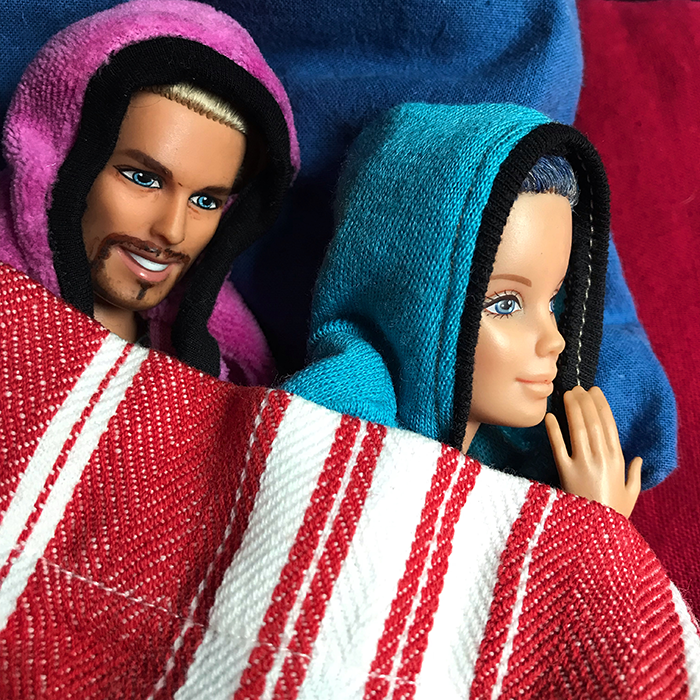 Kaarna can’t believe Ken forced her to this! She feels so awkward in a home of a total stranger. Ken is in the seventh heaven though.
- Oh Venla! Your home is beautiful! I love that staircase! And just look at those glass doors! Stunning! 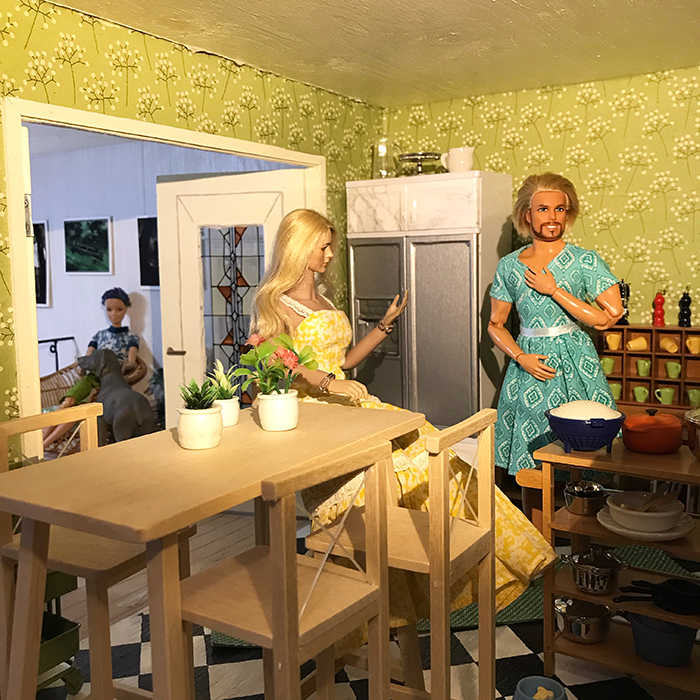 Ken is amazed when Venla introduces the huge house, but Kaarna stays behind. She’s relieved about the dog. Paying attention to a needy pet makes all social situations easier. 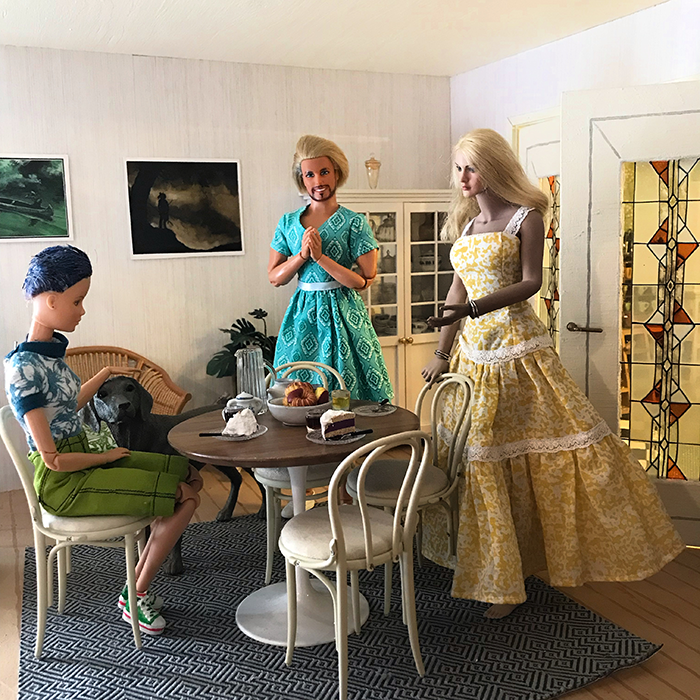 Ken enjoys chatting with Venla for hours. They have only met briefly before, so it’s great to be able to sit down without hurry. Venla has baked cakes of all sorts! She’s such an amazing hostess.
- And smoking hot also, Kaarna thinks. Her boyfriend is one lucky bastard. 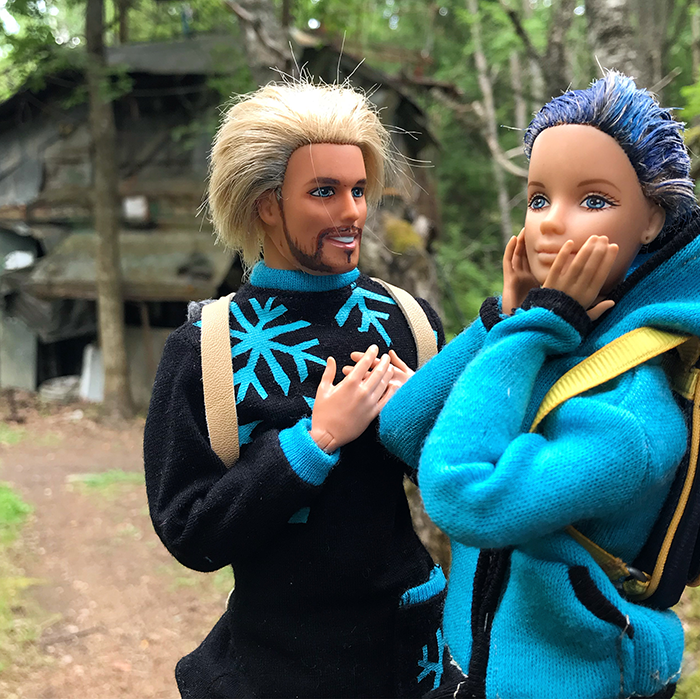 Today is Kaarna’s turn to be in ecstasy. She finally finally has the chance to see Villa Mehu. It’s so much more magical than she even imagined. Also Ken is gasping for breath for the excitement. 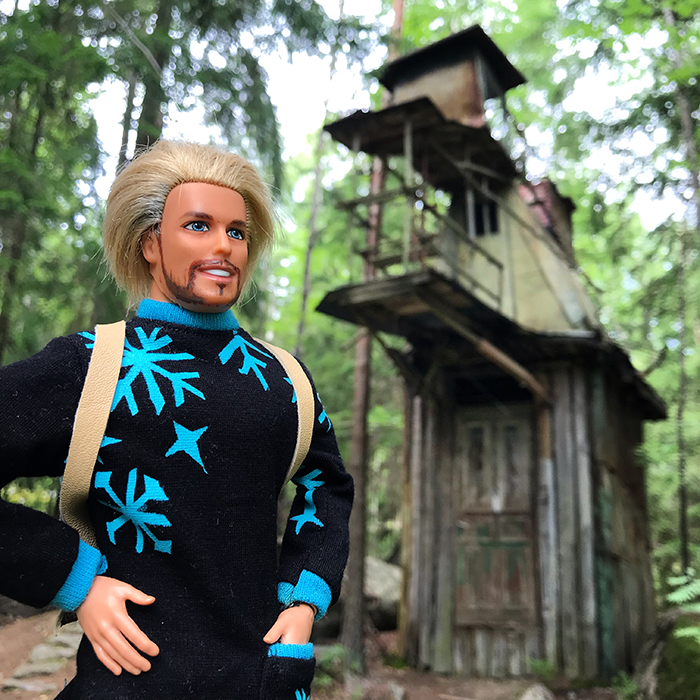 Call it madness, call it art, call it anything you want, but the fact is that this place in the middle of a forest was built by a single man who lived here for decades, in these selfmade shacks. 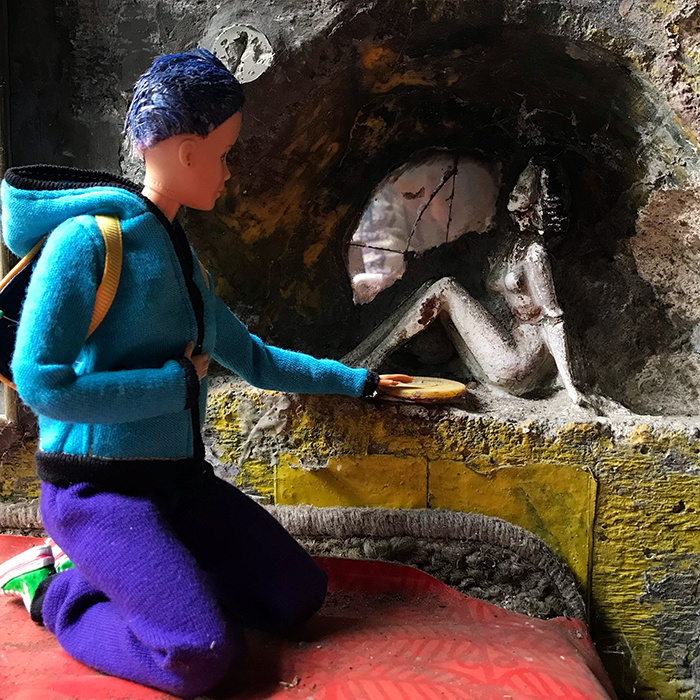 The cottages are small and broken, but Kaarna goes inside of all of them. There’s so much to see, and everything is overwhelming and unbelievable. She takes photos, even if she knows she won’t be able to capture the magic. 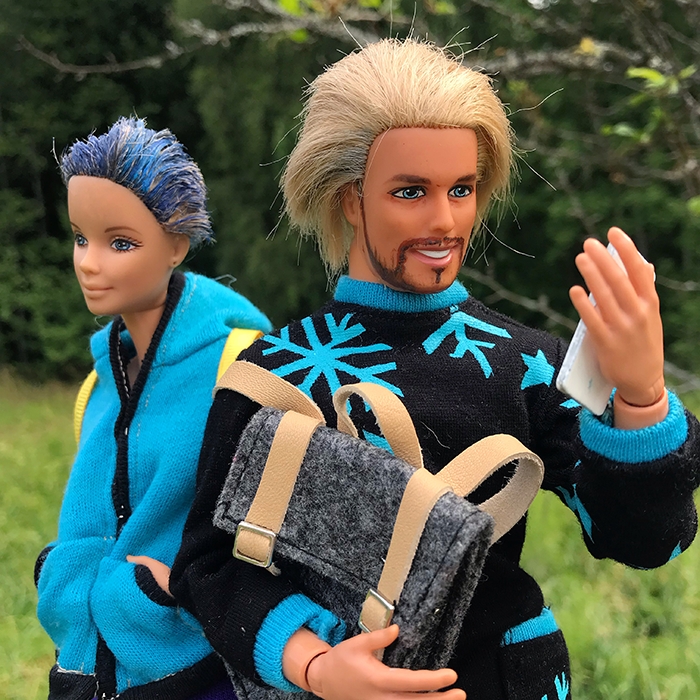 - Let’s find a nice meadow or something to have a picnic. There’s a manor really close, they should have a nice garden!
- Manor? We can’t go to someone’s mansion.
- Finnish manors are all hotels and restaurants. Of course we can. This way, through the bushes! 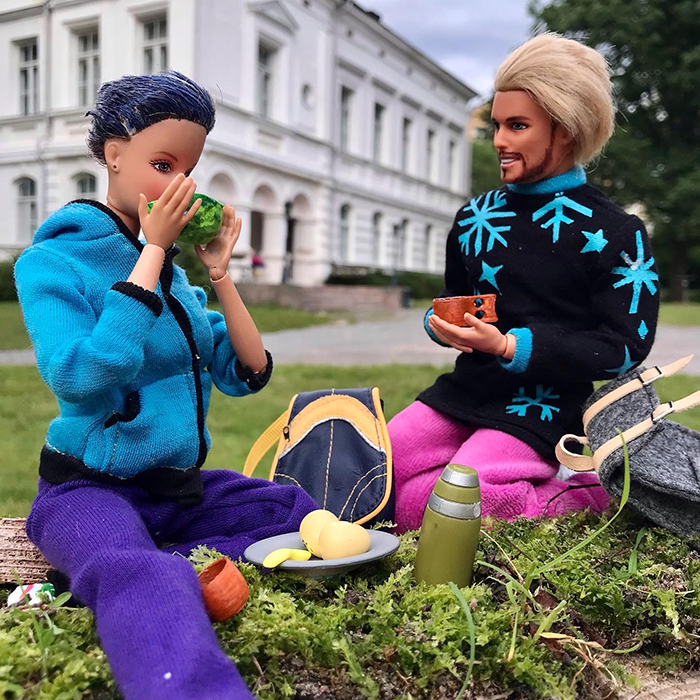 - This garden is strangely quiet for a public place, don’t you think, Ken?
- It’s the weather. Too cold. 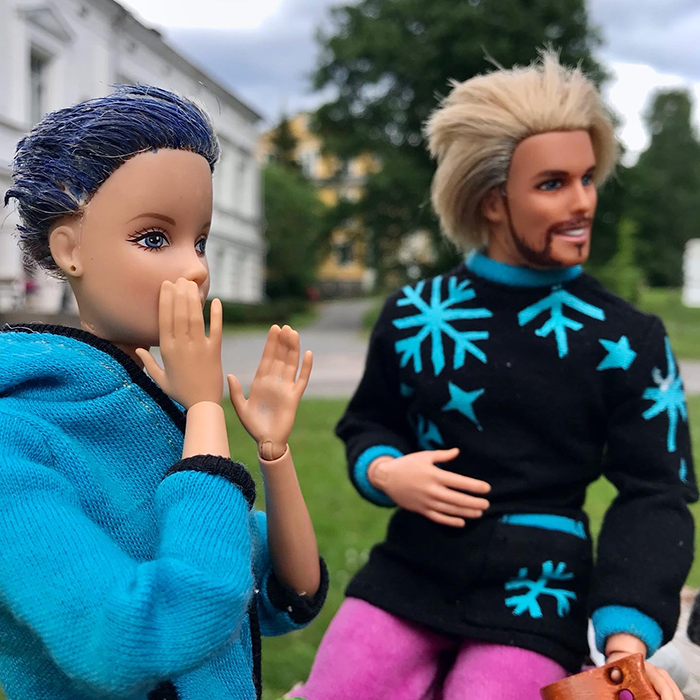 It’s an older lady and she walks straight to Ken and Kaarna. Kaarna starts to pack their stuff immediately! The lady looks at them and says:
- Um, hello… having a picnic here, are we?
- Yes! It’s a nice place, Ken replies happily.
- And where did you get the idea of doing it here?
- Google Maps… Ken begins but Kaarna interrupts him:
- This is not a public manor, is it?
- No…
- We’re having picnic on your private yard, right?
- Yes you are. 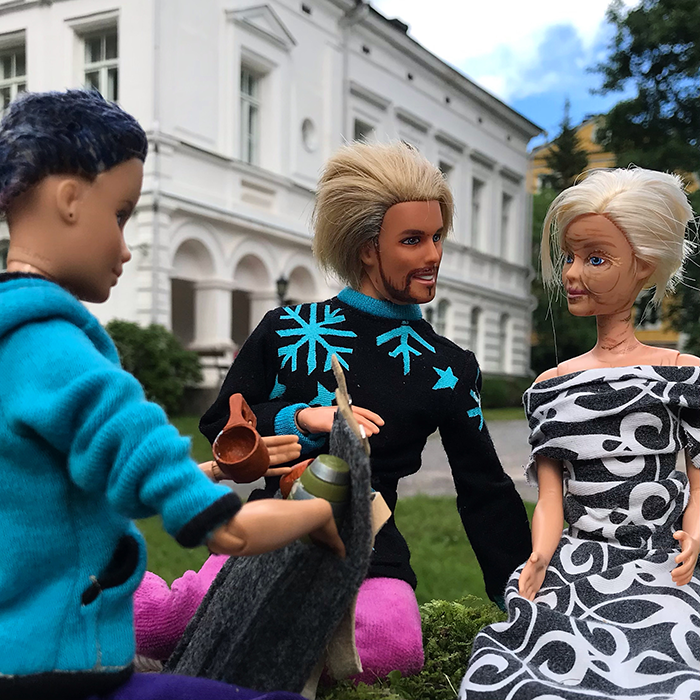 Now Ken becomes embarrased and apologizes.
- We’ll be on our way right now. We’re terribly sorry!
But the lady says:
- Oh no worries, please. I’m happy to have some company.
She sits down and introduces herself:
- I am Isabella von Hottendottir. This manor has belonged to my family for two centuries and here I was born. After many decades abroad I returned home to take care of my parents. They have already passed away and now I live here with my older sister. 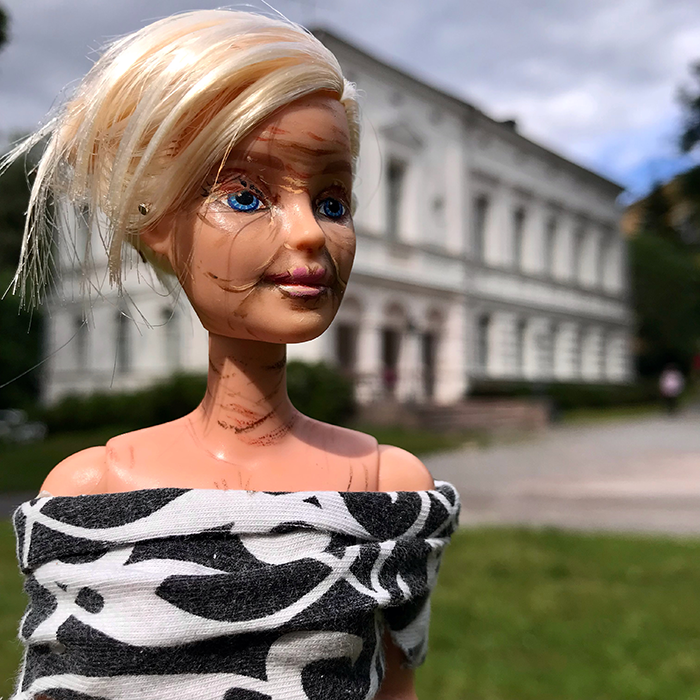 When Isabella von Hottendottir starts to talk, there is no ending! She tells about her impressive career as an opera singer and a basket ball champion. She tells how she has sang in the castles in France and how she knows famous people. She has had four husbands! She also tells about her life today, how she plays tennis to stay fit.
- It’s really important at my age. I’m 79 years old. Look at these calves, I’m still in great shape! But oh my… you’re lucky that my sister didn’t see you here. She hates people and she would have ordered the rottwailers to chase you! She really is a psychopath, but you are my guests now! 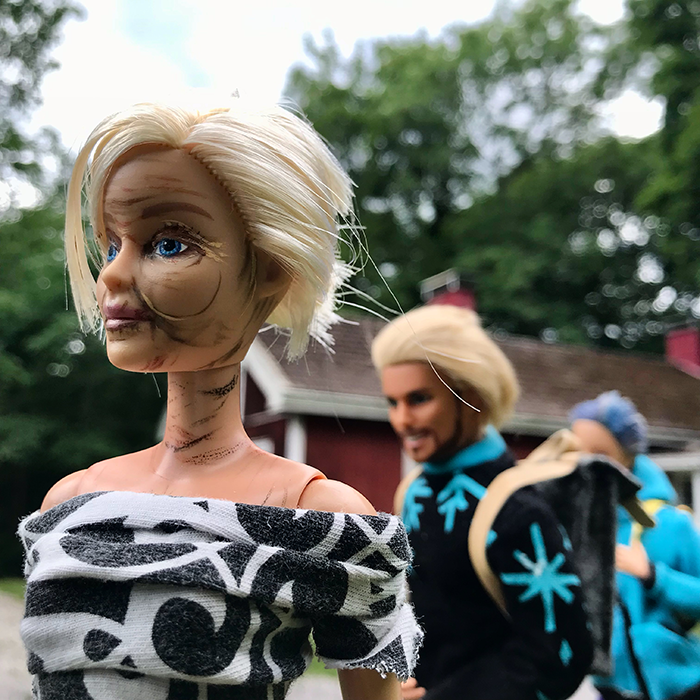 - Let me give you a tour before my sister wakes up from her nap. Here in these red buildings live the help.
- The help? Kaarna asks.
- The servants, Ken whispers.
- We have employees here, doing the farm work and taking care of the garden and house. We own 350 hectares of land. I have to be in charge of everything, since my sister is an alcoholic and very irresponsible. This is between you and me then, I talk too much. 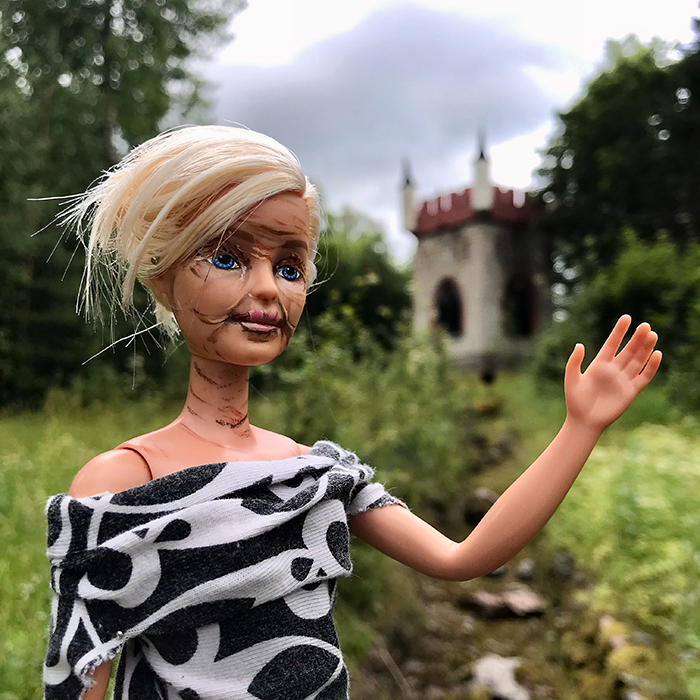 Isabella tells about the exciting history of the mansion. All the stories about love children of masters and maids are fascinating.
- My sister would be so mad if she knew I’m talking about the family’s dark history. But look at that, there’s the orangerie! Let me tell you about what happened there in the early 1920’s…
- Orangerie? Kaarna whispers to Ken.
- I have no idea. I’ve never heard that word before. 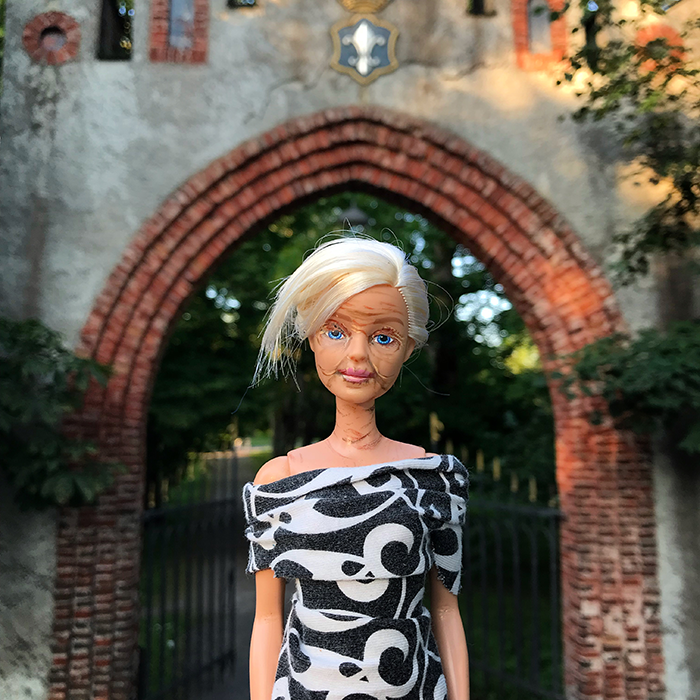 Very delicately Isabella ends the tour on the main gate and sends Ken and Kaarna on their way.
- I think we are done with the rains now, she mumbles and gracefully walks back to her mansion while the sky starts to clear up. 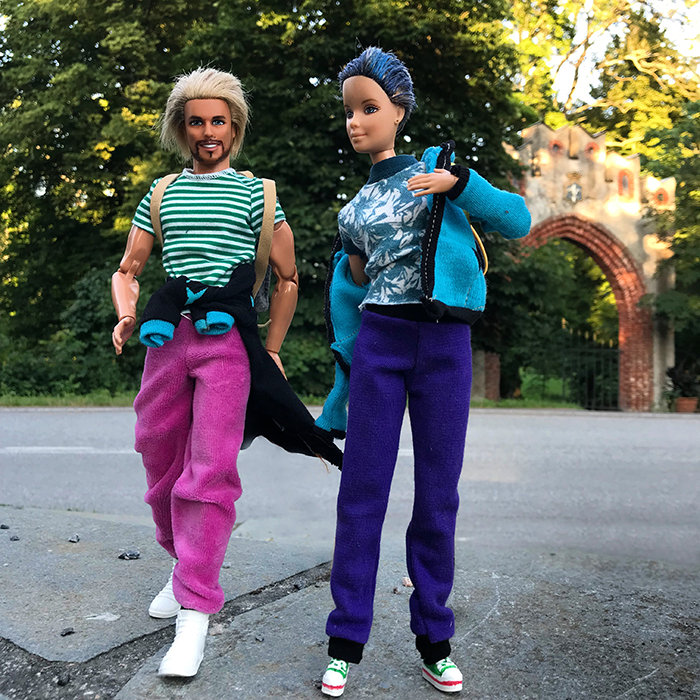 - What a woman, Ken says.
- Sweet balls of Jesus…
- She’s amazing, so charming and charismatic. And so beautiful! And think about the life she has led…
- Ken! Are you really that naive!? You can’t seriously believe her stories! It’s bullshit from the beginning to the end. Psychopathic sister my ass! That Isabella is the only narcissistic psychopath in this story, believe me.
- Kaarna!
- All the classic characteristics. I know.