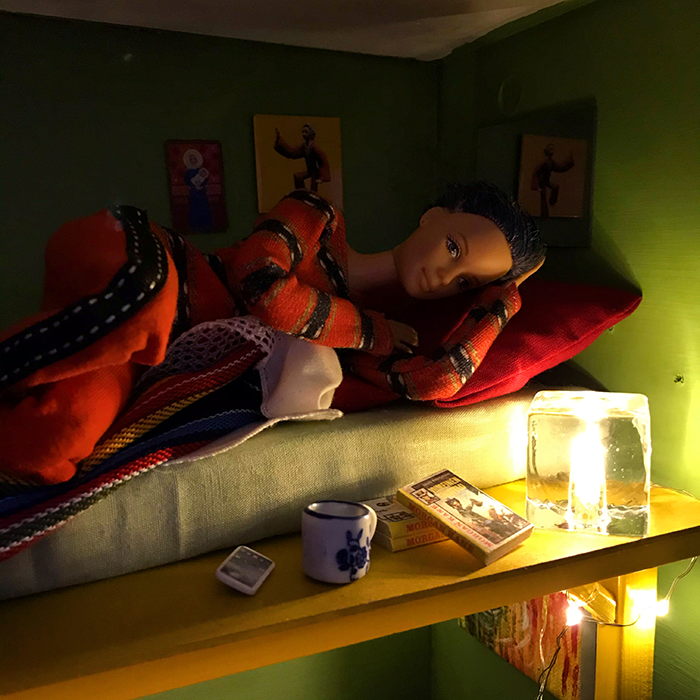 Kaarna’s therapy is beginning today. Because there are not enough therapists in Finland, she has to travel to another town to meet the only one who was able to take a new client. This feels way too overwhelming. 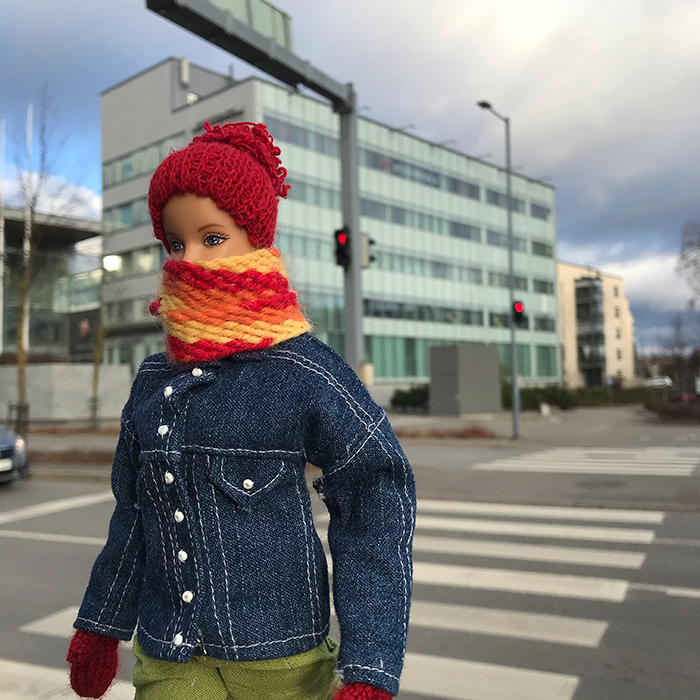 She hates cities and especially traffic lights. If there are no cars approaching, what’s the point of obeying a stupid red light? The first impressions: The therapist is older than Kaarna thought. The room is boring and too pale. But there’s an old rocking chair, that makes Kaarna feel somehow calmer. 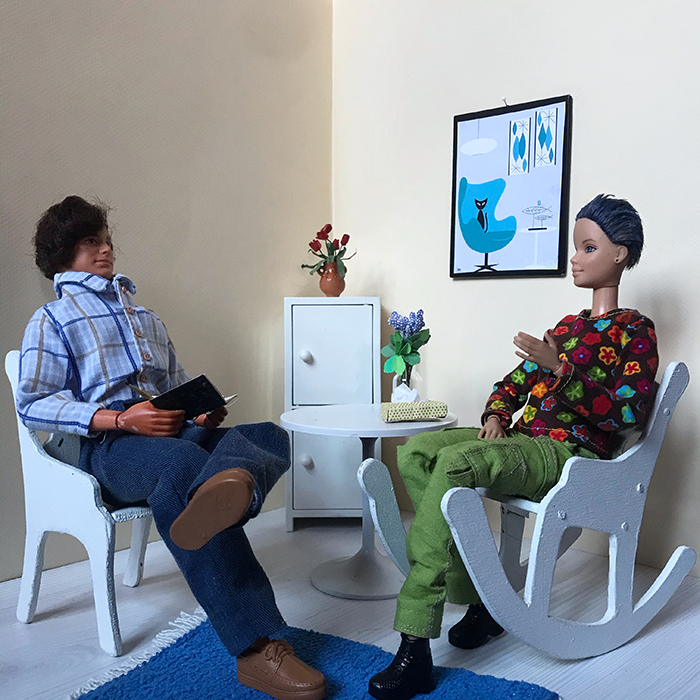 Kaarna spends an hour talking about her childhood family. Now she feels that this therapy thing might actually do good for her. That is if the therapist can look at her ugly forehead every week and listen to her nasty voice without vomiting. 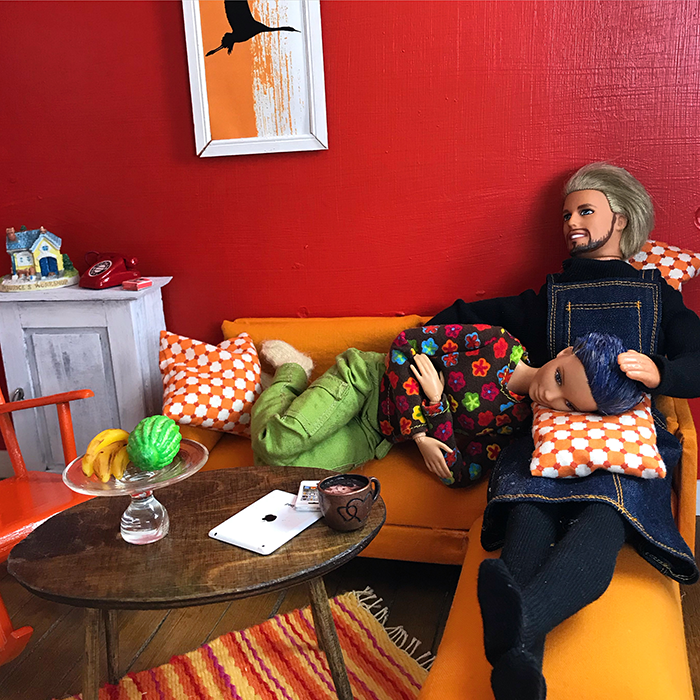 She is dead tired after the therapy. It’s hard to talk about yourself and try to answer to difficult questions. Ken is dreaming of having wallpapers. 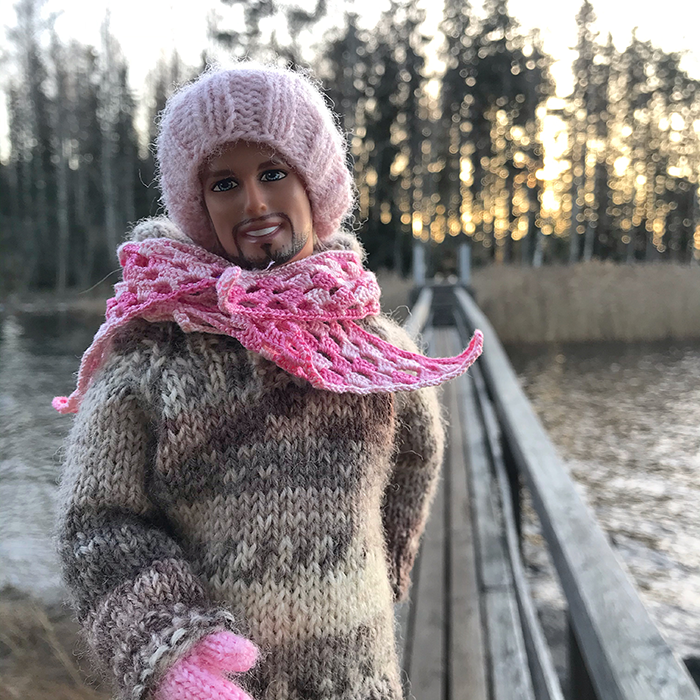 It’s a beautiful day and Ken is smart enough to take a break from sewing. He goes for a walk. 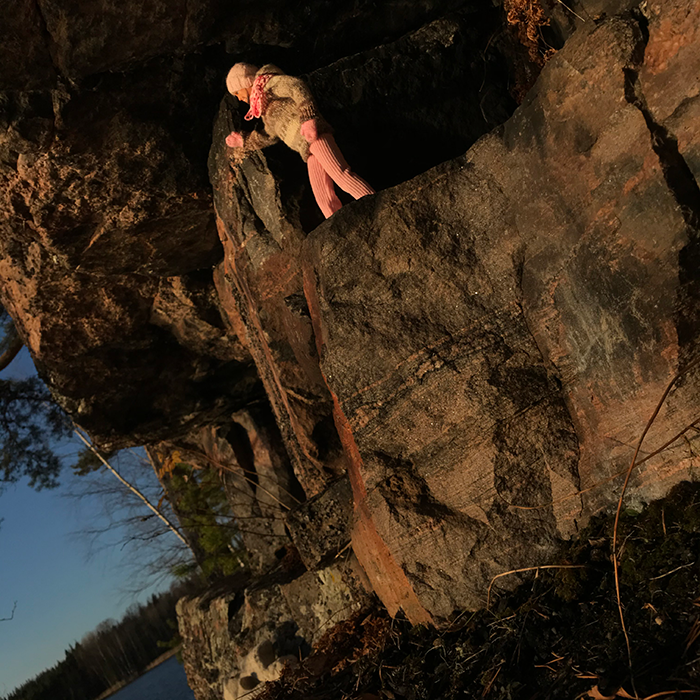 He arrives at the top of the rocks by the lake and suddenly memories fill his thoughts. Down there is the place where Hector nearly drowned years ago, when he accidentally fell into the freezing water. 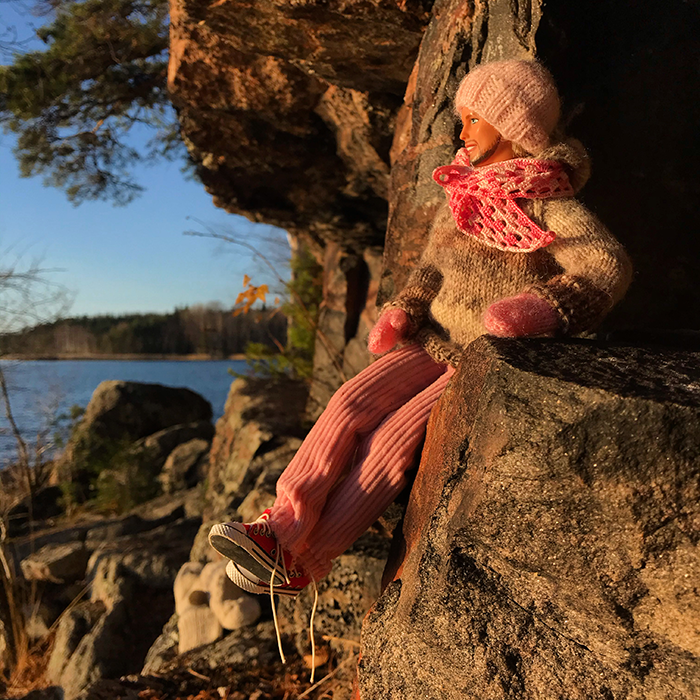 The sun has warmed up the rocks so Ken sits down as the memories of Hector are coming back to him. Hector was the nicest, kindest, most warm-hearted man on Earth. Funny and caring. And the best friend also. Ken misses him tremendously. 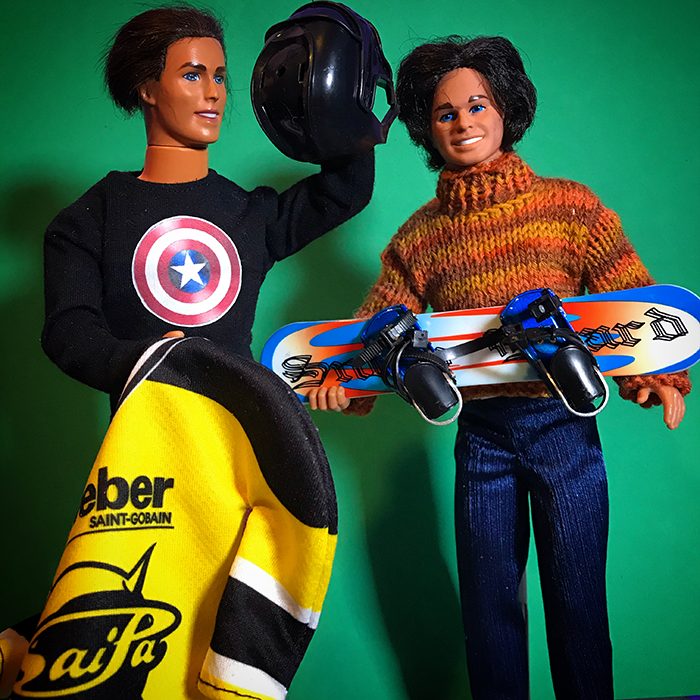 He knows that Hector is happy living in Lapland with Santtu and doing all kinds of winter sports. He deserves all the happiness he can get. Even if Ken has many great things going on in his life these days, it’s still hard to understand that there’s no going back. With these thoughts he starts walking towards home, before the sun gets down and the air gets unpleasantly cold. 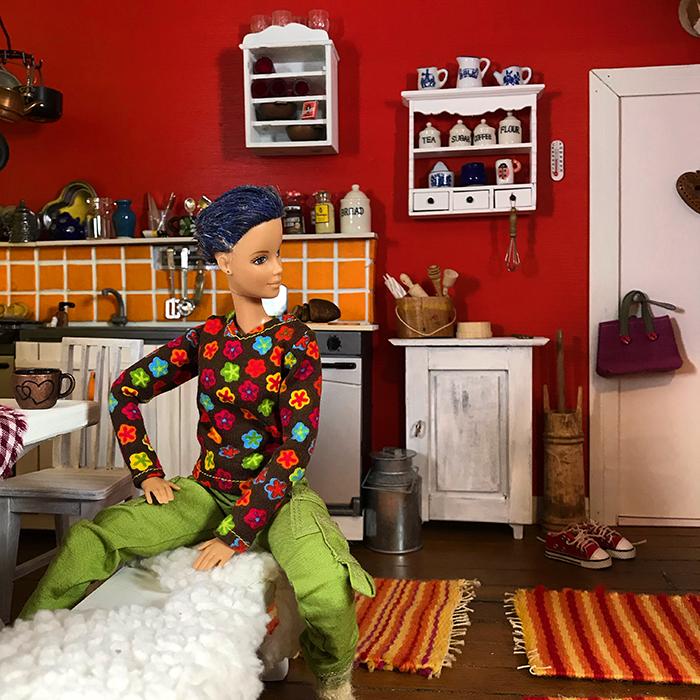 Ken and Kaarna are having tea when somebody knocks on the door. Kaarna gets up to see who it is. 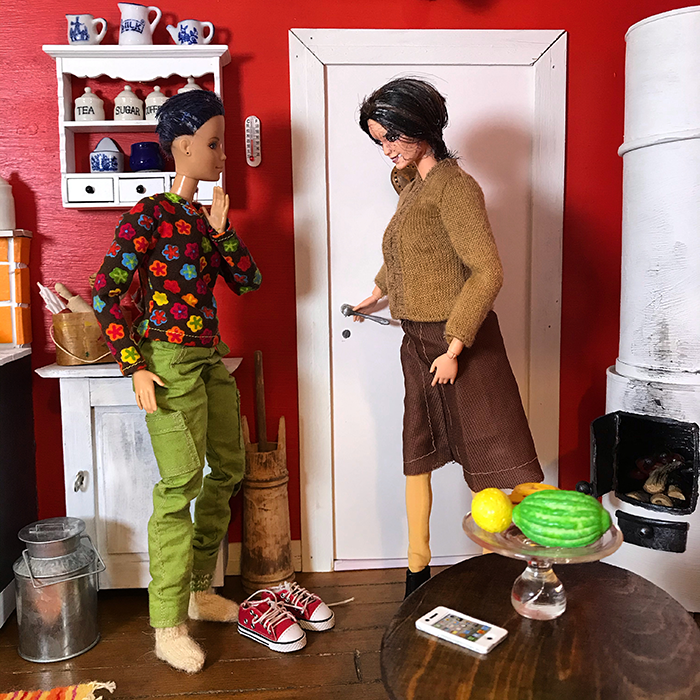 It’s Filia!- My door is locked, I am outside. Go get the strong girl! 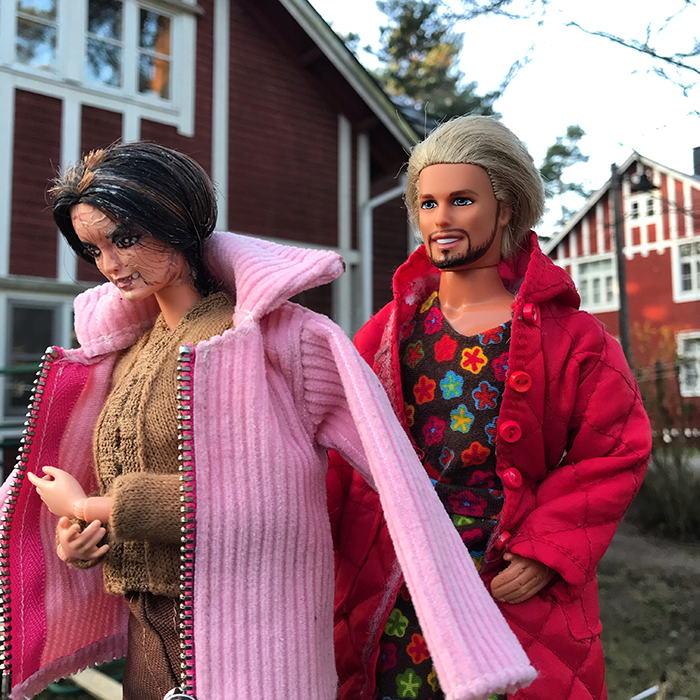 It’s very cold outside, and Ken lends Filia a coat. 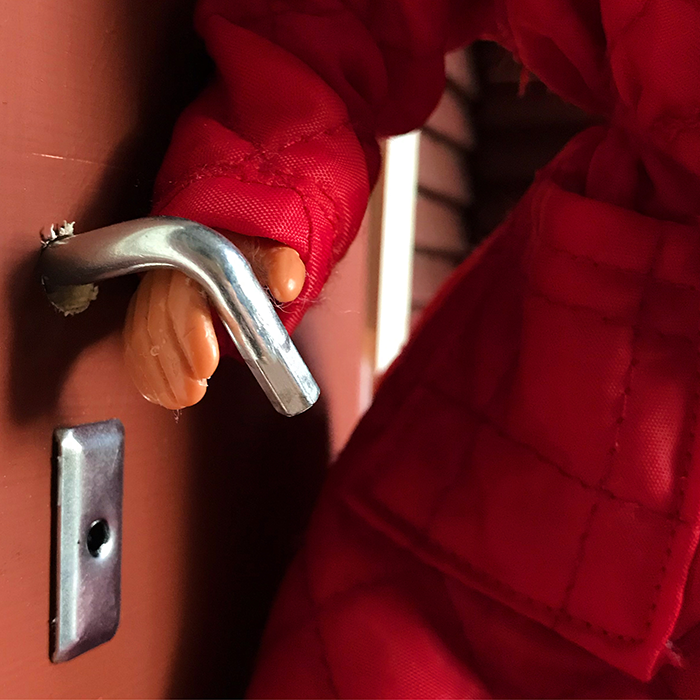 Filia’s door is stucked and the handle is broken. But Ken manages to pull the door open. He advices Filia to contact the housing cooperative to have someone fix the lock. 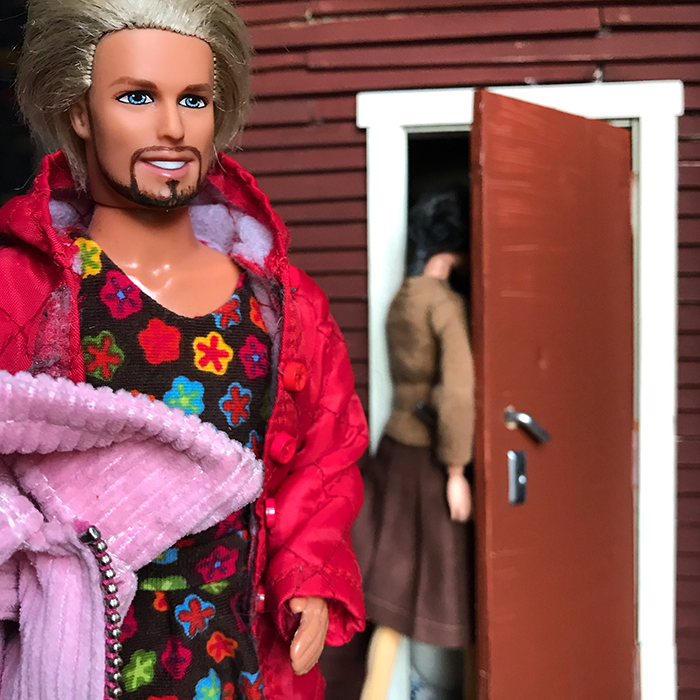 Thank you, Filia says and disappears to her apartment. 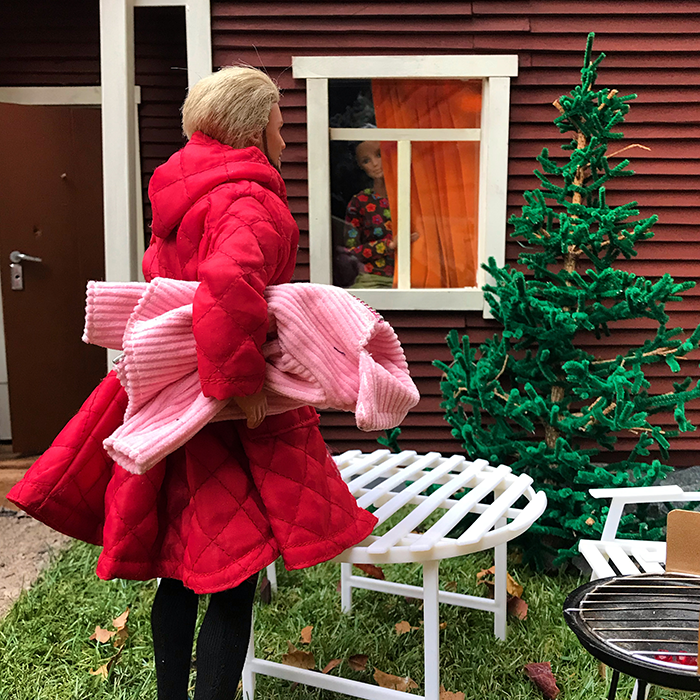 Ken looks around and thinks that he could cut down that three for Christmas. It grows way too close to the house. - I wonder if Kaarna has any plans, or could she spend the holidays with me here. 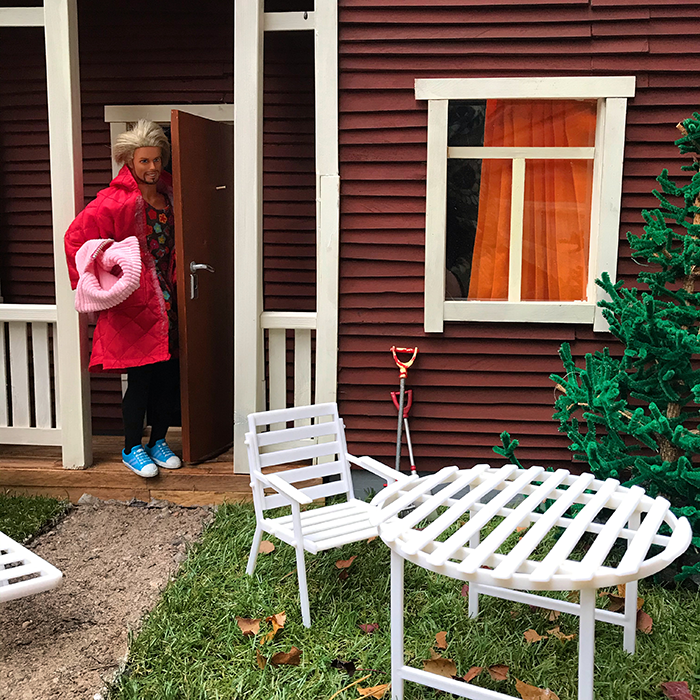 - And I should take the barbecue and the table set to the basement before winter... I hate this time of the year. I wish I could sleep until spring. 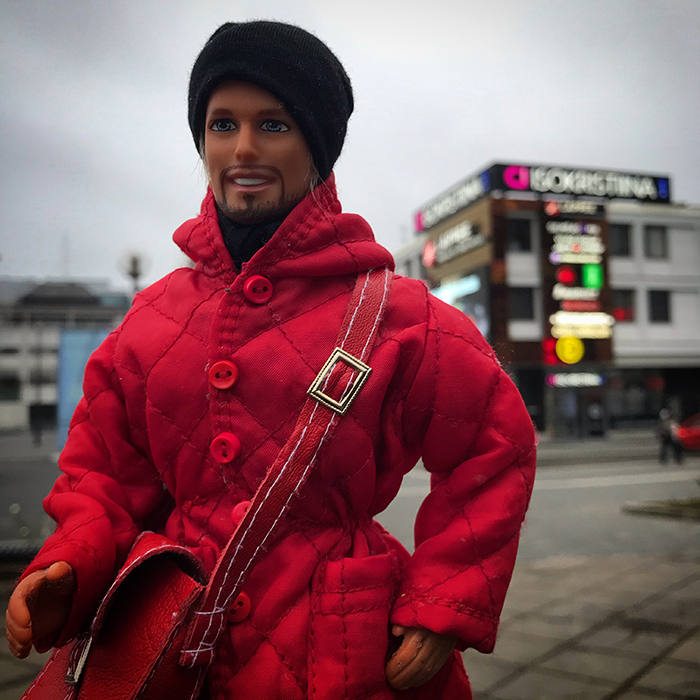 Ken and Kaarna go to the city together. While Kaarna is meeting her therapist, Ken goes shopping. 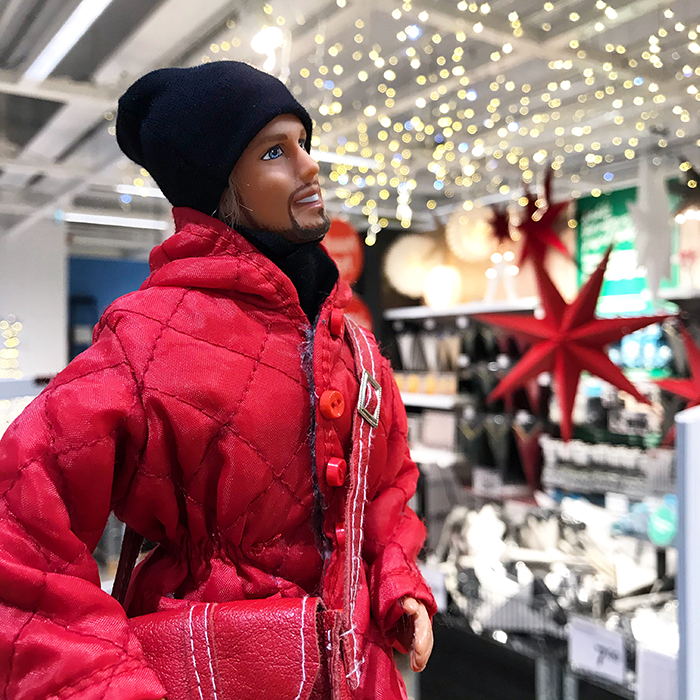 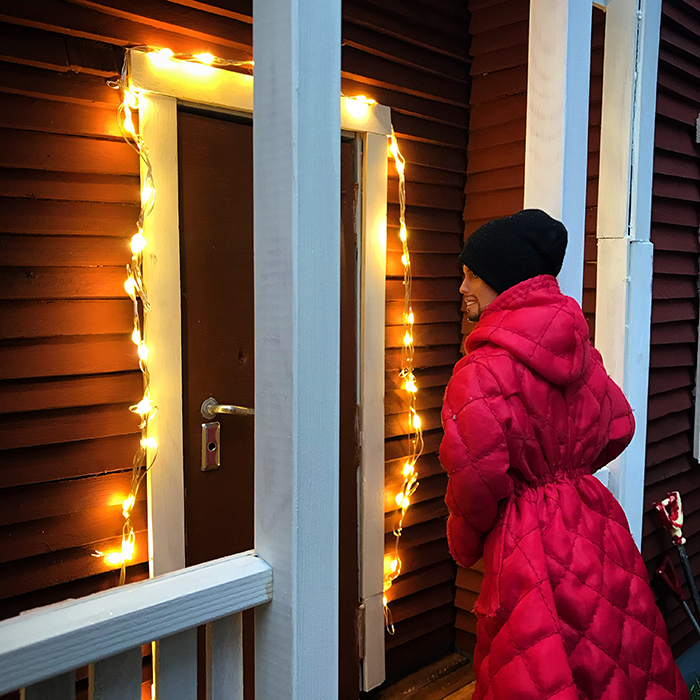 There’s a start, Ken thinks and steps back to admire the lights. This is how dark it is at noon today. 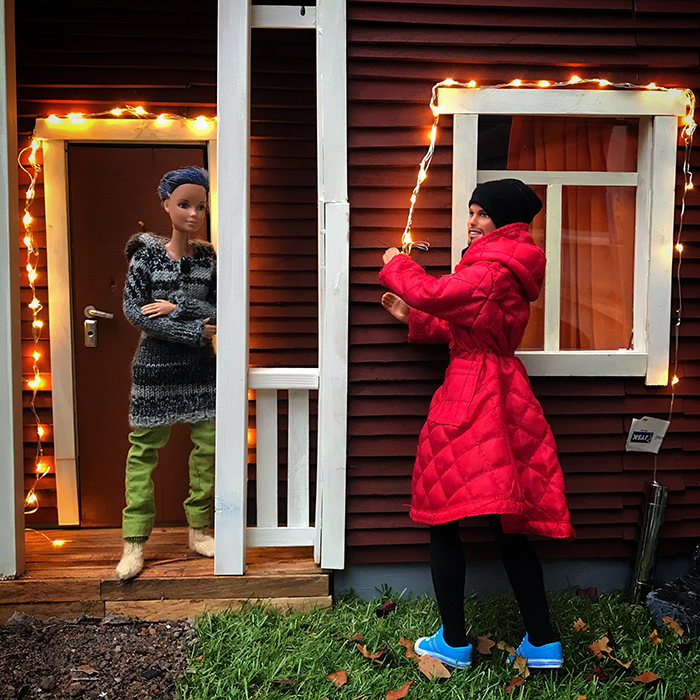 He puts identical lights both on his own and Kaarna’s porch. It’s starting to rain and Kaarna is devastated. - Why rain? Can’t we at least have snow?- Blame on the climate change for that. We have to try our best to make it through the “kaamos” time, Kaarna. There’s Miss Amadoria’s theater show soon and then we can attend Ellie’s Independence Day party... 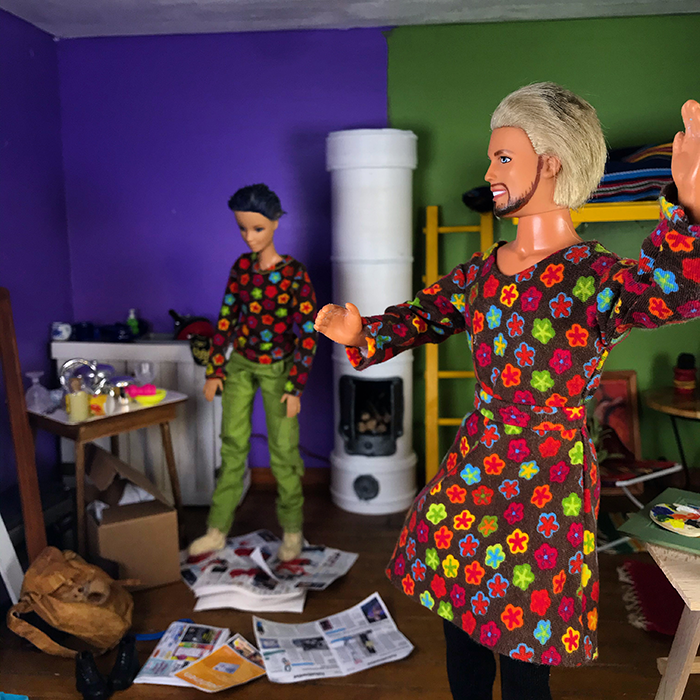 Kaarna is having another bad day and she tells Ken:- I can’t get this kitchen renovation done. The violet wall was a mistake. It’s dark and gloomy and depressing and I hate it. I have no strength or energy to do anything about it either...- Can I do it? Can I do my magic and creat a kitchen for you? It would be therapy for me!- Yes yes yes please!- But only after Miss Amadoria’s show. I can’t concentrate on nothing else now. 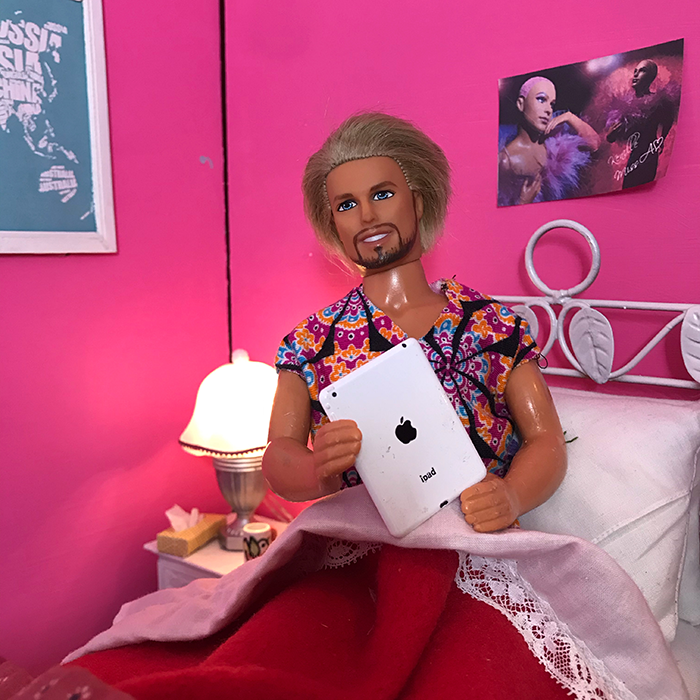 When Ken wakes up he always checks the social media and email. This time there is a surprise that makes his heart bounce! An email from Miss Amadoria asking him to stay behind after the performance in the theater this evening! 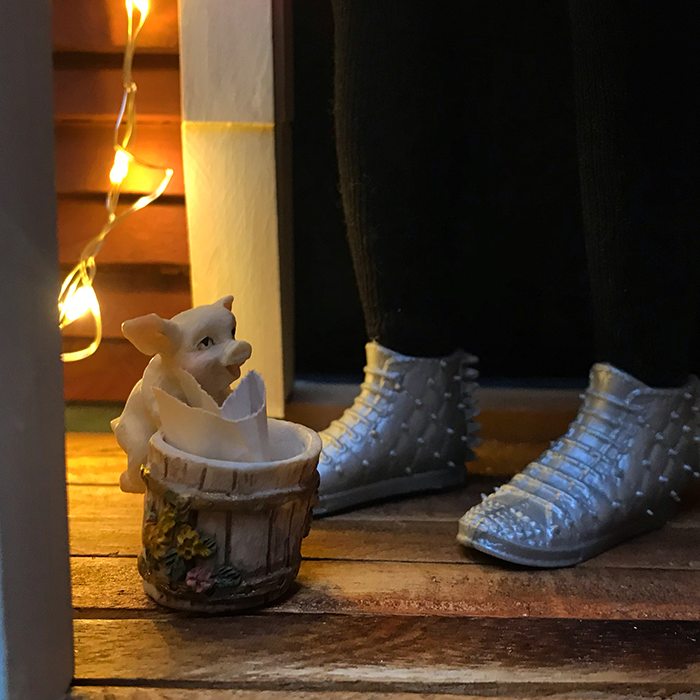 When Ken steps out, he notices something hideous on the porch. 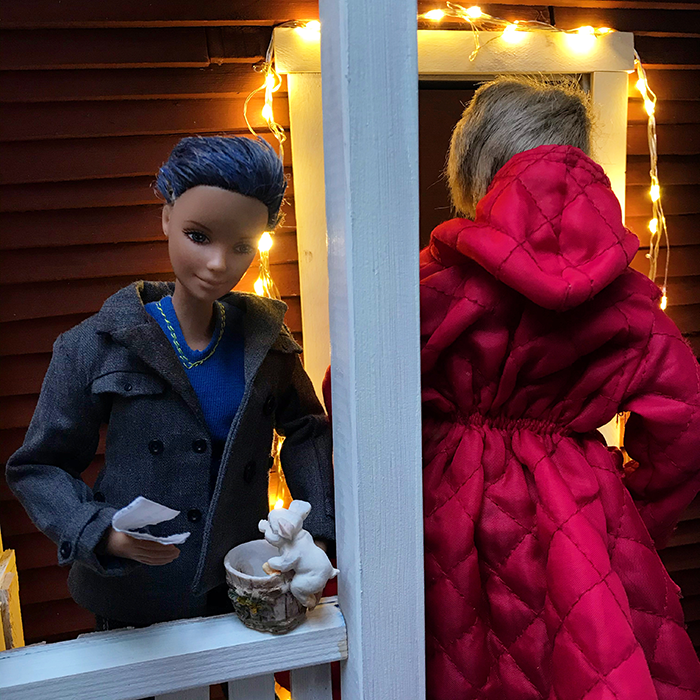 While Ken is locking the door, Kaarna picks up this bowl with a pig ornament. - There’s a note. This horrible thing is a thank you gift from Filia. What are you going to do with it? I just hate when people give decorative stuff as gifts. Too bad you don’t smoke, this pig would be a great ash tray.- I’m sure Filia thought it’s a pretty bowl and thought I would love it. Let’s get going. 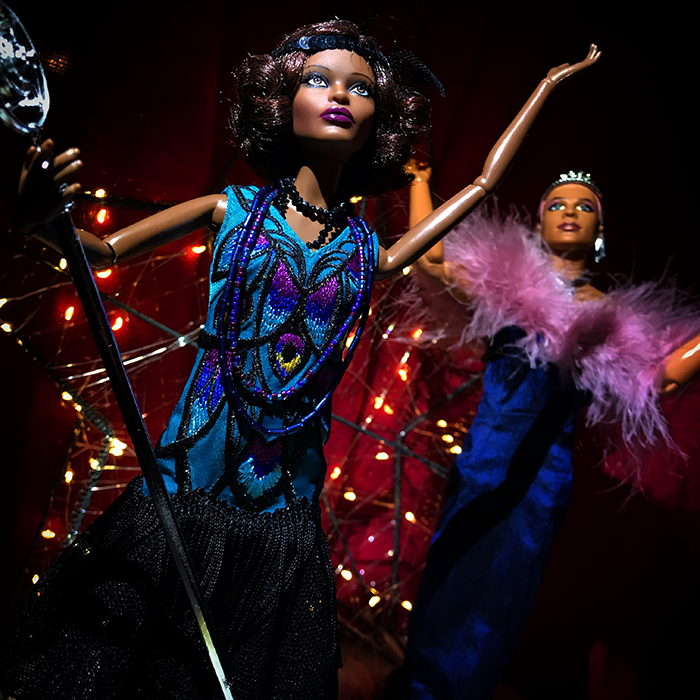 Miss Amadoria has created a whole new show for the pre-Christmas theater tour with guest stars and everything. Ken is in seventh heaven and Kaarna doesn't´t get bored. 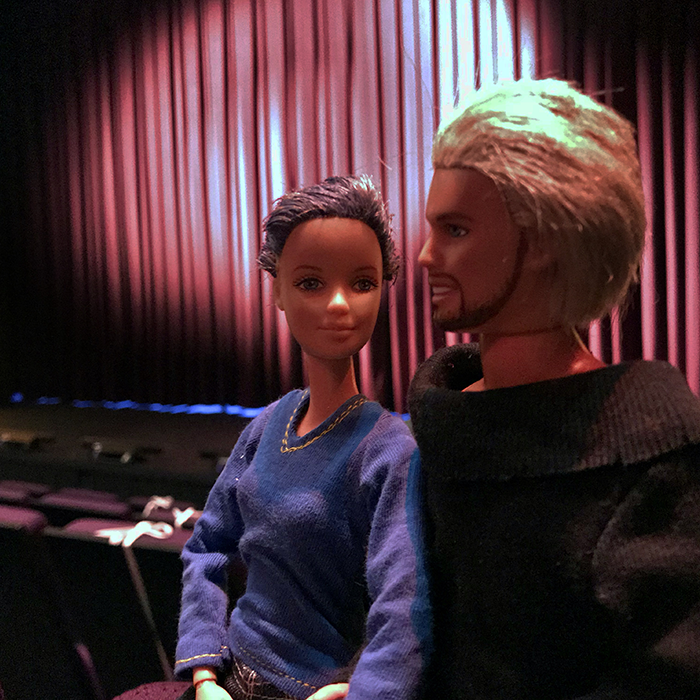 They spend a good while waiting after the show. Kaarna is suspicious, and thinks that Ken has misunderstood something. Just when she’s about to suggest leaving, they hear someone calling Ken behind the curtain. 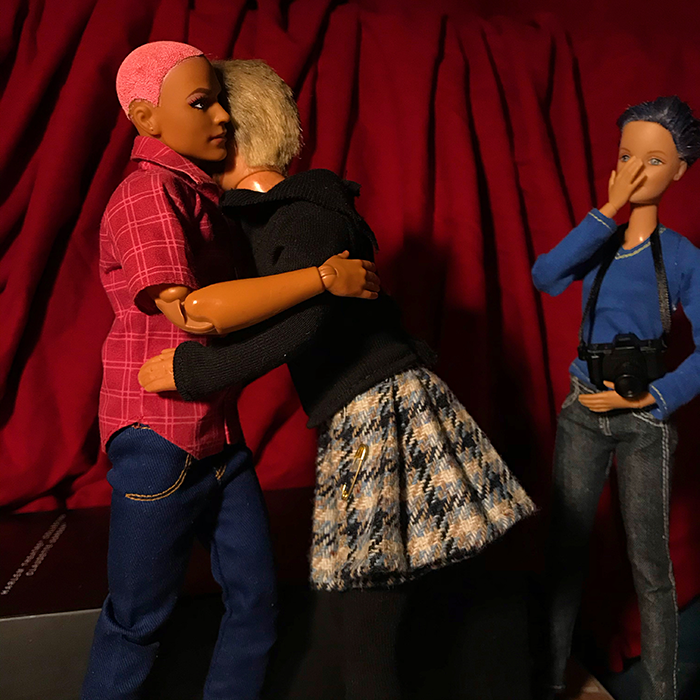 Miss Amadoria appears and spreads his arms to give Ken a hug. Yes, it really is he, who does it first and Kaarna can’t believe her eyes. Ken is super worried about having sweaty armpits.- Thanks for coming, Miss Amadoria says.- Miss Amadoria, the show was amazing!!!- Call me Olli. Miss Amadoria has left the building! 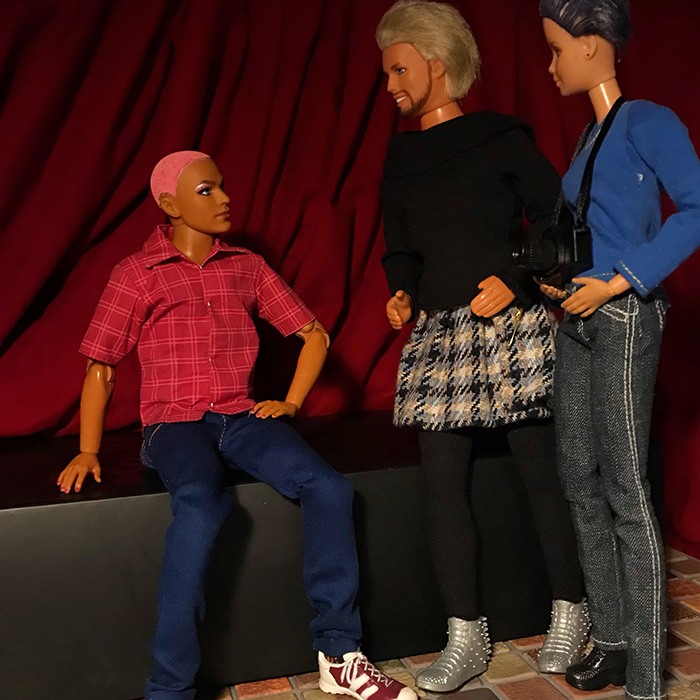 Miss Amadoria, Olli, looks so small without the high heels. They just chat for a while, like friends or something. (Friends with sweaty armpits.) Olli says that the photos on the fan club page are really great and asks if he could use them on his social media. He tells that after Christmas he will come to work as a choreographer at a musical production here at their home town theater and maybe they can meet again then.