2020 - Getting through the kaamos time 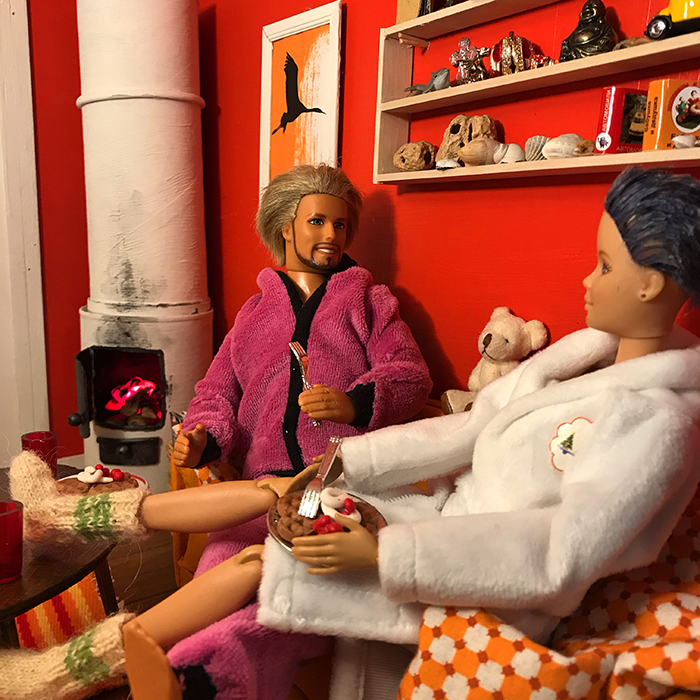 Ken and Kaarna are recovering from Amadoria/Olli. They have waffles after sauna, which is a good way to relax after something so exciting.

- Can you believe he loves your photos so much!? How amazing is that!!!

- Yes, it’s nice. But Ken... I’m thinking about the Independence Day party and what to wear. Do you have any clothes left from your butch times? Like a suit or something? 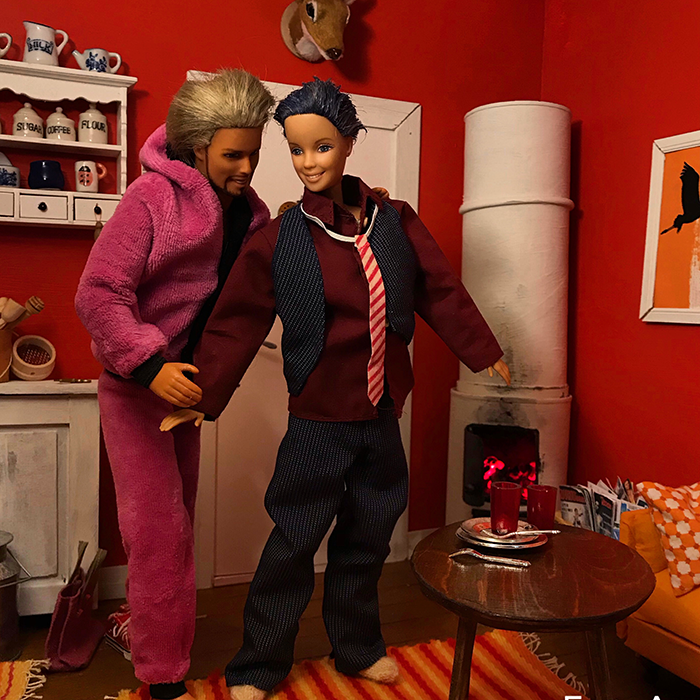 Ken goes to get something from his closet and gives Kaarna a pile of clothes that she puts on. They can’t stop laughing. 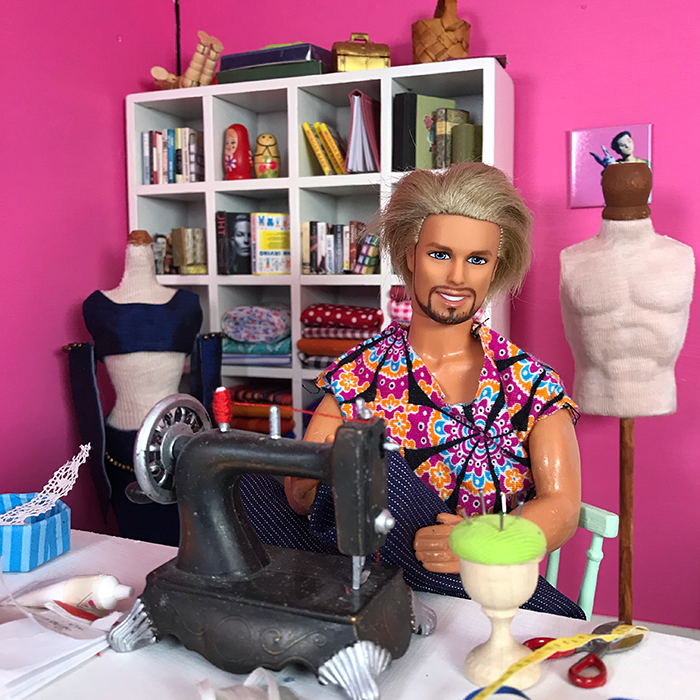 The next morning Ken jumps out of the bed and goes straight to sewing. He’s thrilled to get to make a festive outfit for his best friend. 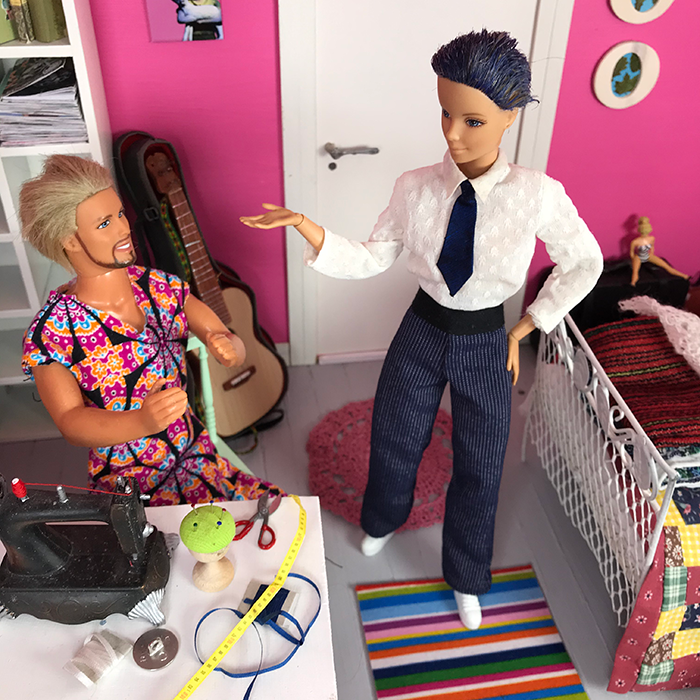 When he has finished sewing Kaarna’s outfit, he asks her to try it on.- Wow!!! You look super sexy! 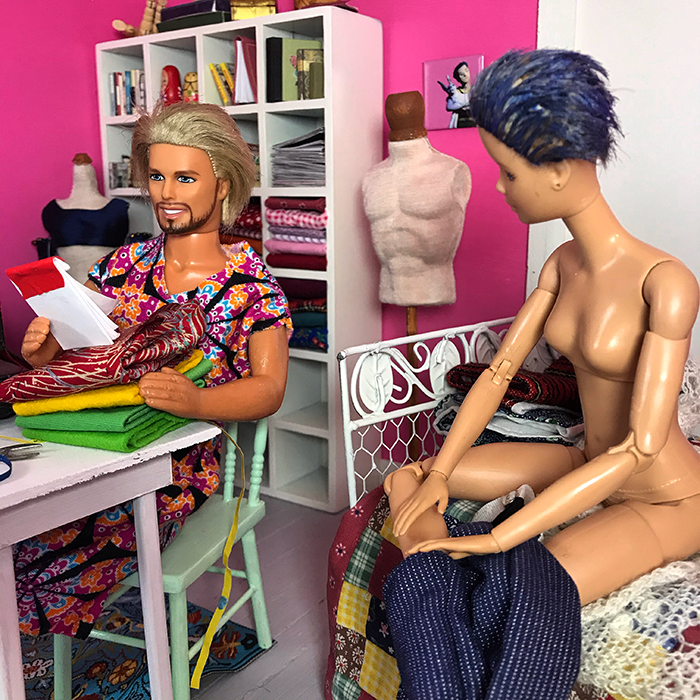 - What are you going to wear, Ken?- Most likely some old rag. I have so much work now that I may not have time to sew anything new for myself. But it’s ok. I own a lot of evening gowns. 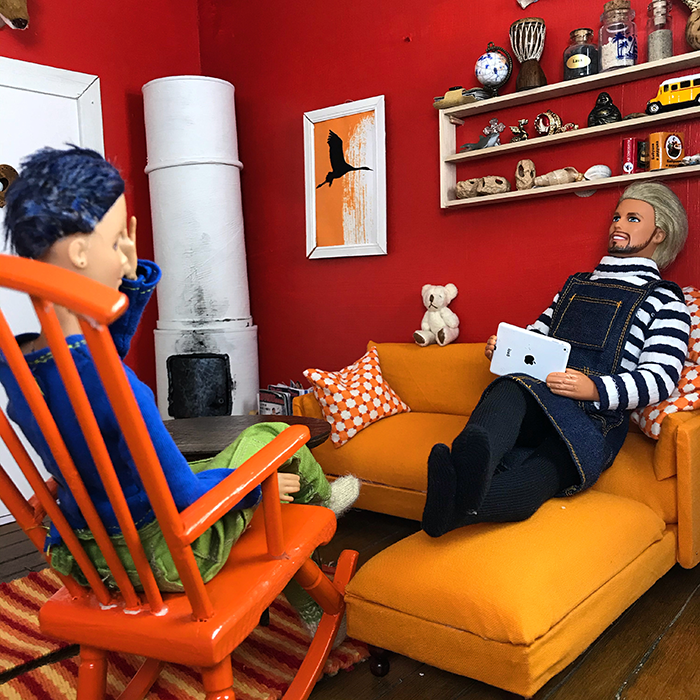 One afternoon Ken´s got good news:- I signed us in on a gym class!- You what?!- I work too much and you sleep too much. The weather sucks so neither of us goes outside anymore. Something had to be done! Put on your aerobic leotards!- My what?! 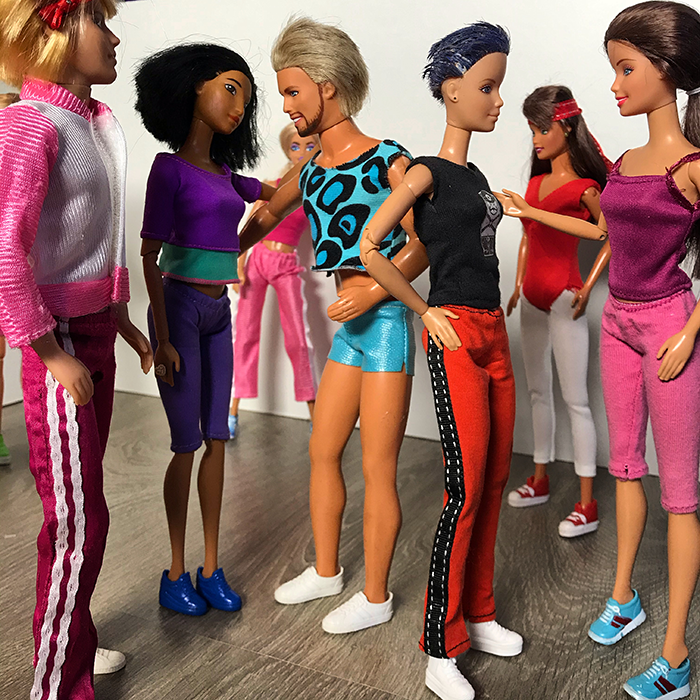 It’s a pleasant surprise to notice that there are old friends at the gym! Ken is glad to see Selma and Olga, and Kaarna spots Taylor! 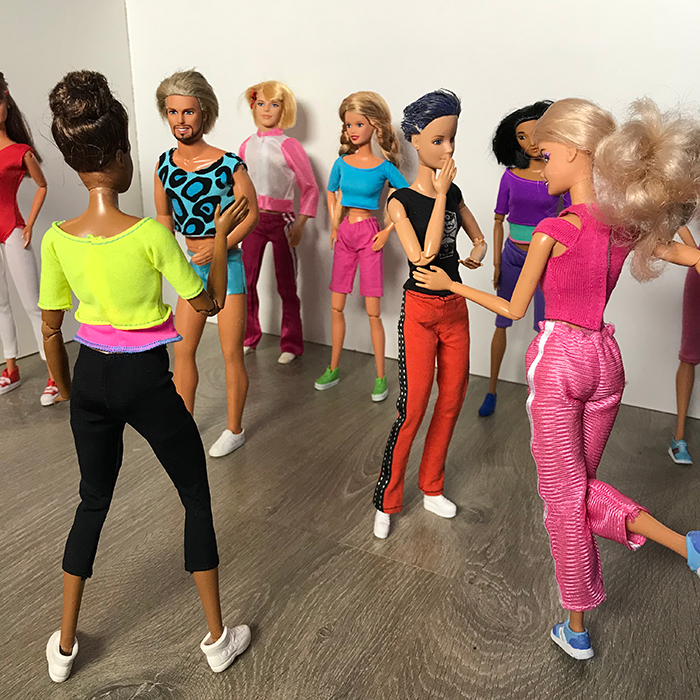 When the instructor is about to start the class, a girl with big blond hair and too much make-up runs to Kaarna and speaks on a low but angry voice:- You can’t stand there! That’s my spot! I’ve been exercising on this spot for ten years!Kaarna gets embarrassed and feels uncomfortable, mumbles that she’s sorry. 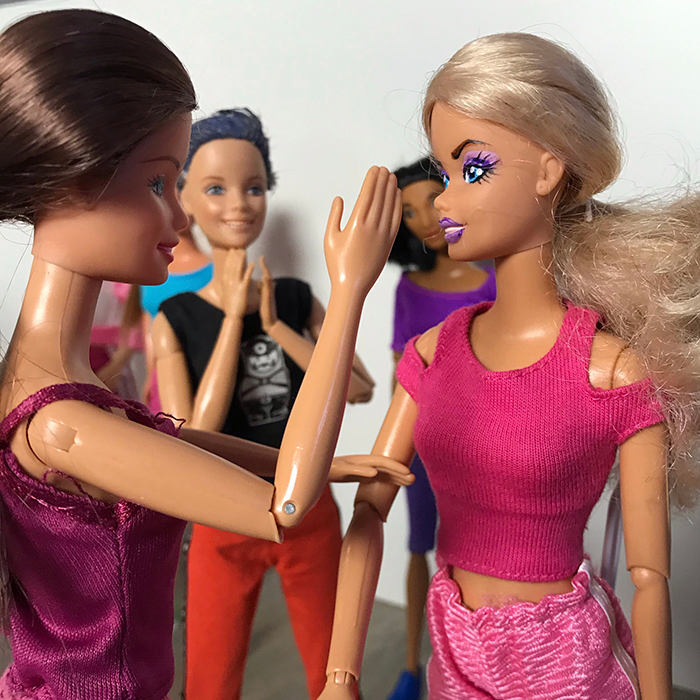 Taylor is quickly confronting the girl. It looks like she wants to push her, but she just yells:- Ten years! Then you must already know every move and you can very well go to the back row! Besides your horrible botox lips block the view from the others anyway. Off you go! 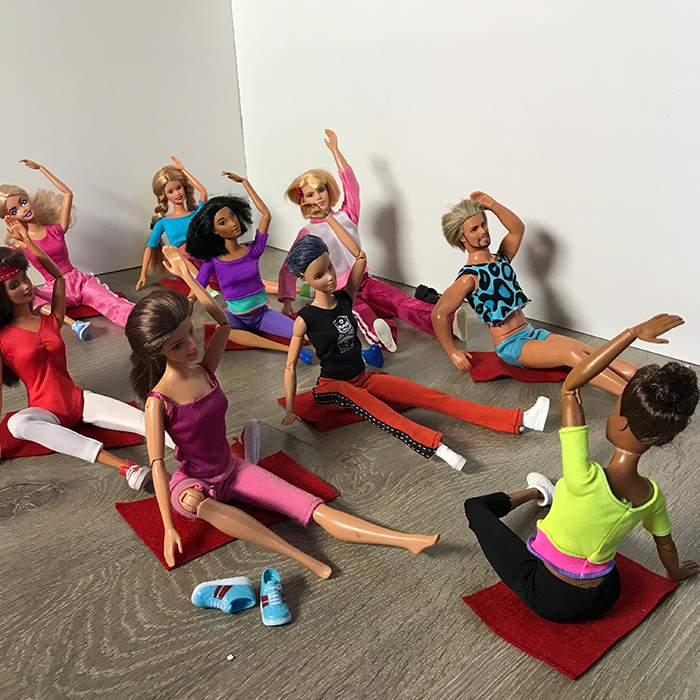 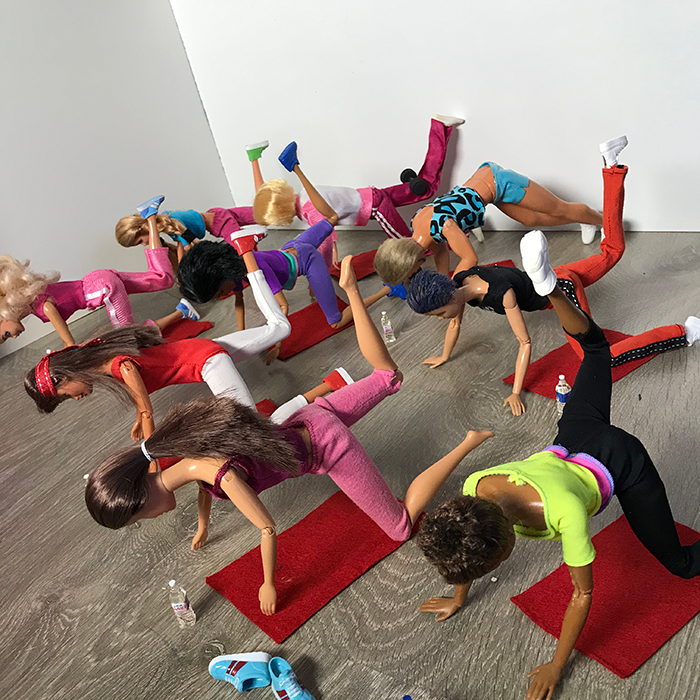 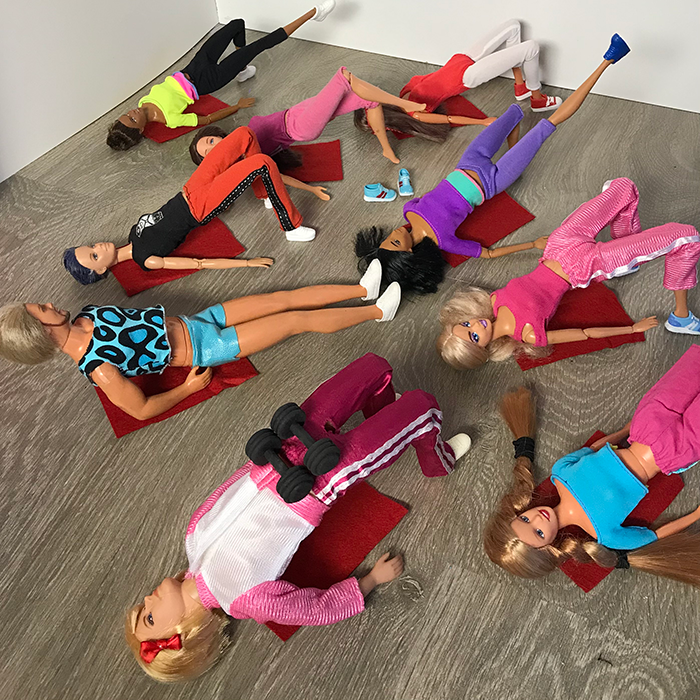 As soon as the class begins Ken realizes that he’s unable to do the exercise. 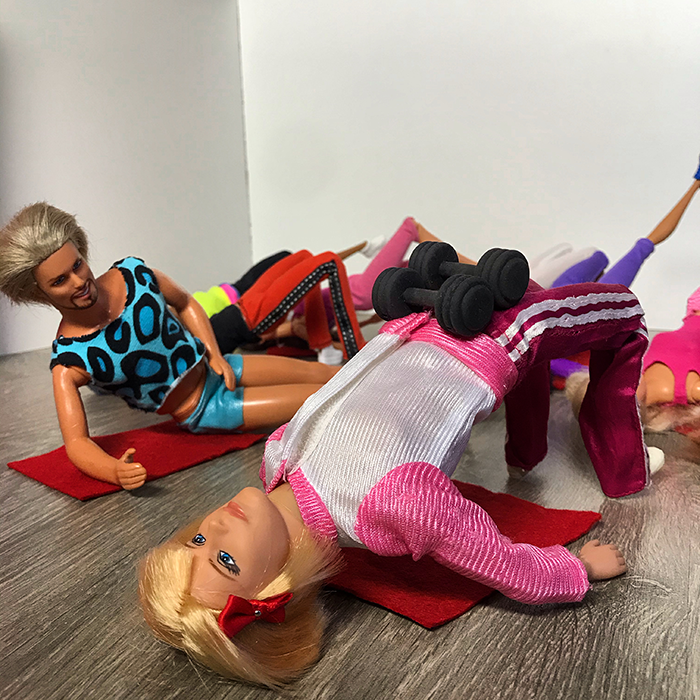 He is the only one in the room with testosterone, but still he’s definitely the most hopeless case. He looks around and sees that everyone else is doing great and Olga even adds weights! 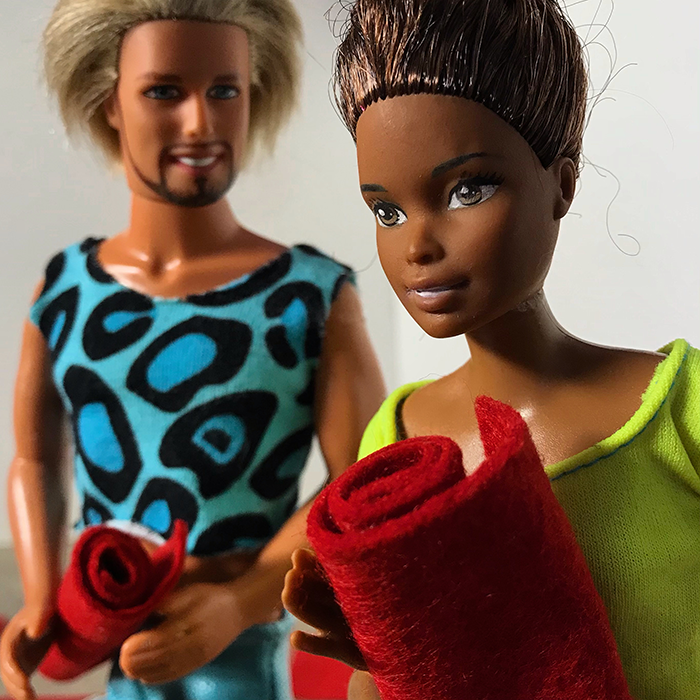 After the class he talks to the instructor about his problems during the class and she says:
- You really don’t belong to the target group of this class. This is for the ones born with an articulated body or the ones who have had a body transplant surgery. You’ll never be able to learn the moves no matter how hard you try. But you can still attend the classes, it won’t harm you either. 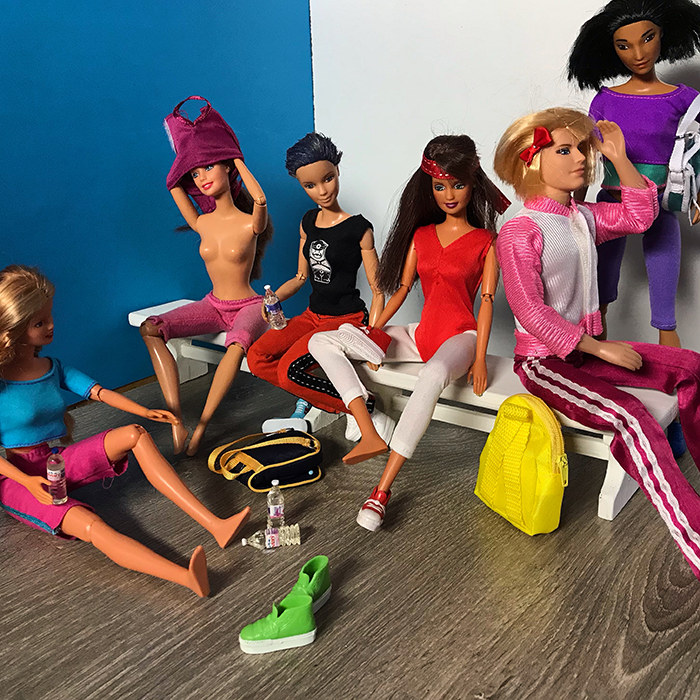 Meanwhile in the locker room Taylor keeps blabbering about some dude that was a beast in bed, but Kaarna doesn’t listen. She looks at the beautiful normal sized feet that some of the girls have and she feels insecure. 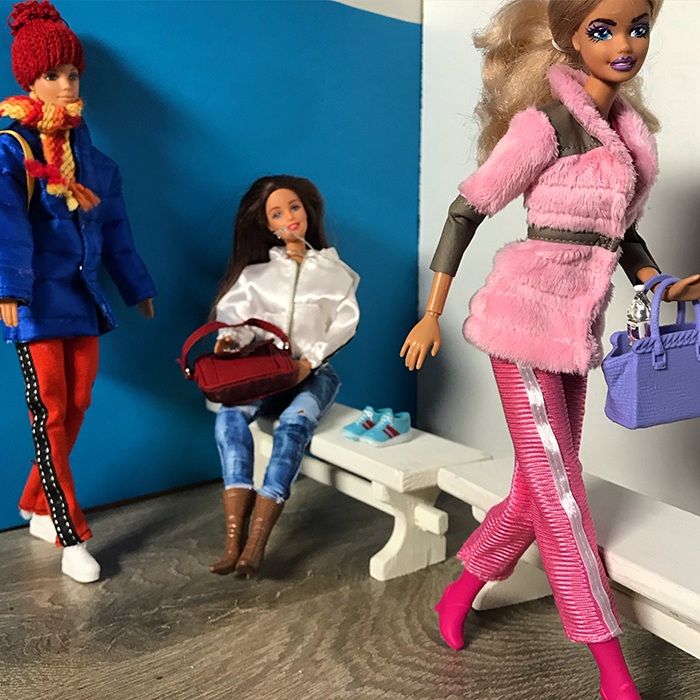 Before the botox girl leaves she points out that they do not tend to change places in the class. Taylor is getting bored with her and just says:
- Get over it, Jessika. And Kaarna adds: - I will keep changing places every week. Your world will fall apart.Then she wonders how insane this is. “It’s like high school all over again. Maybe that girl has a low self esteem when she has to put on that kind of mask of makeup and botox. I don’t know what she has been going through. I will let her keep her stupid spot.” 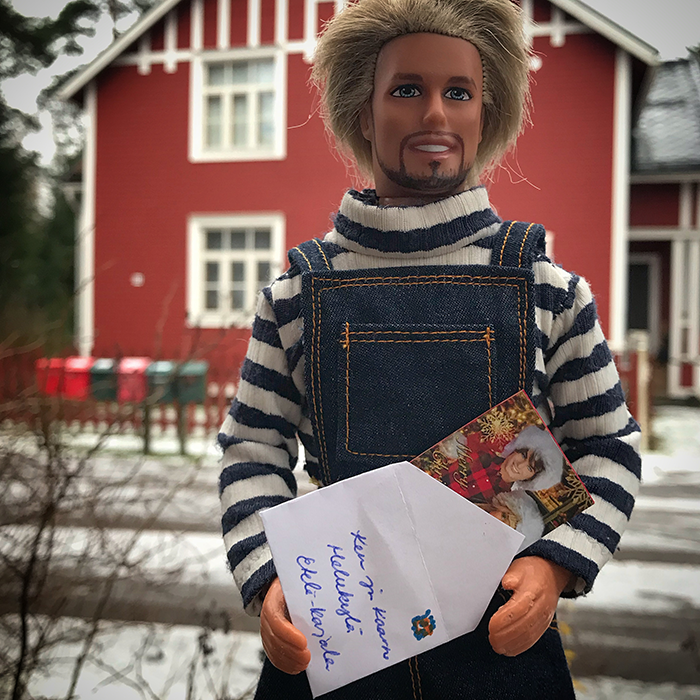 The first Christmas card arrived already and it’s not even December yet! It’s from Ellie and Damon and Ken thinks that maybe the horrible “kaamos” time of the year would be easier to bear if he would try to absorb some of Ellie’s holiday enthusiasm. 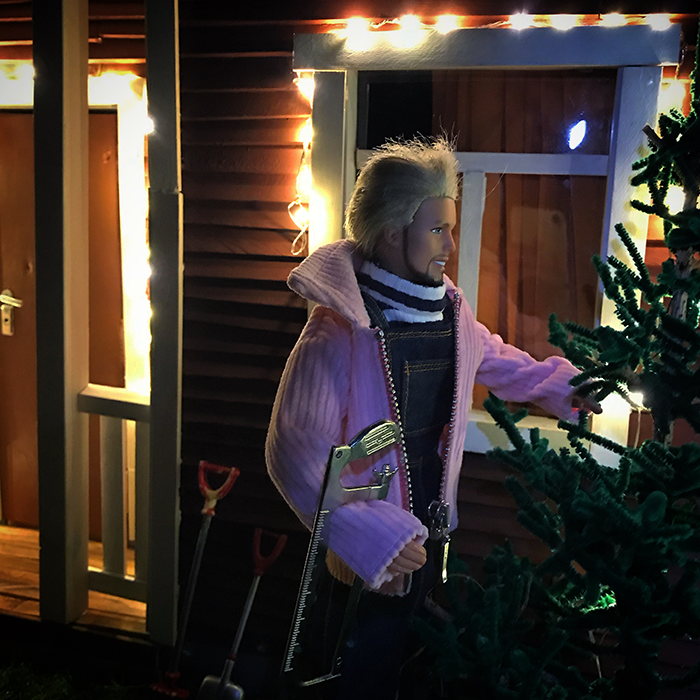 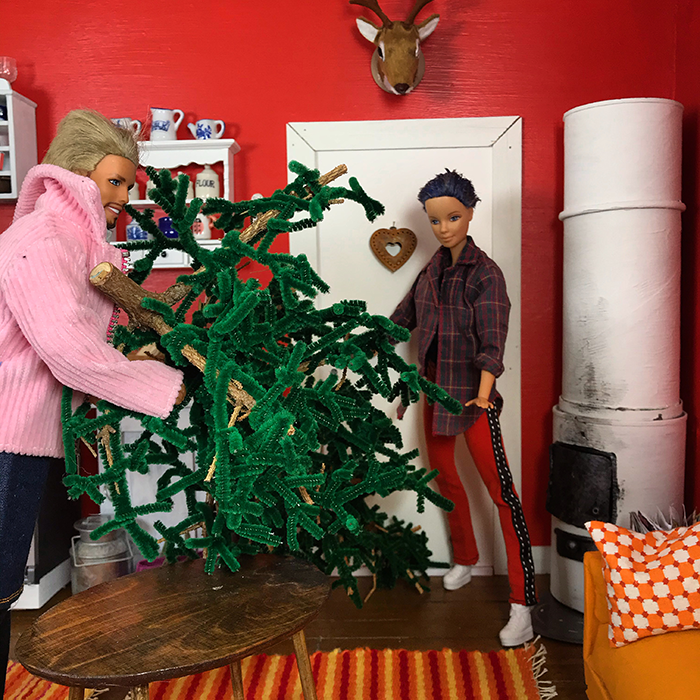 - I usually bring the tree in on Independence Day, but since this year we are attending the Finland´s Independence Day Ball With Dolls we can as well start our holiday season today! 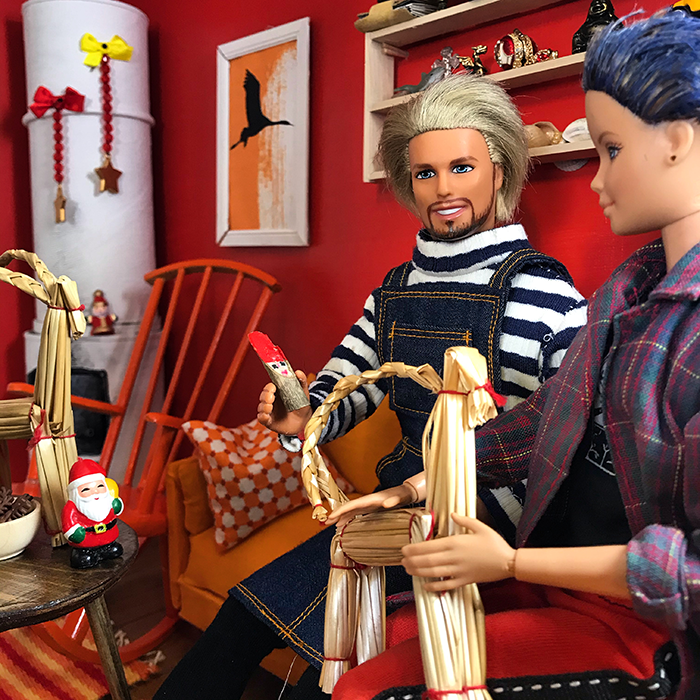 Ken takes out the Christmas ornaments.- I made this elf as a kid.- It’s horrible! Kaarna laughs.- I know! But I think it’s nice to have something from way back too. Those straw goats are older than I am. I buy or make some new ornaments every year. 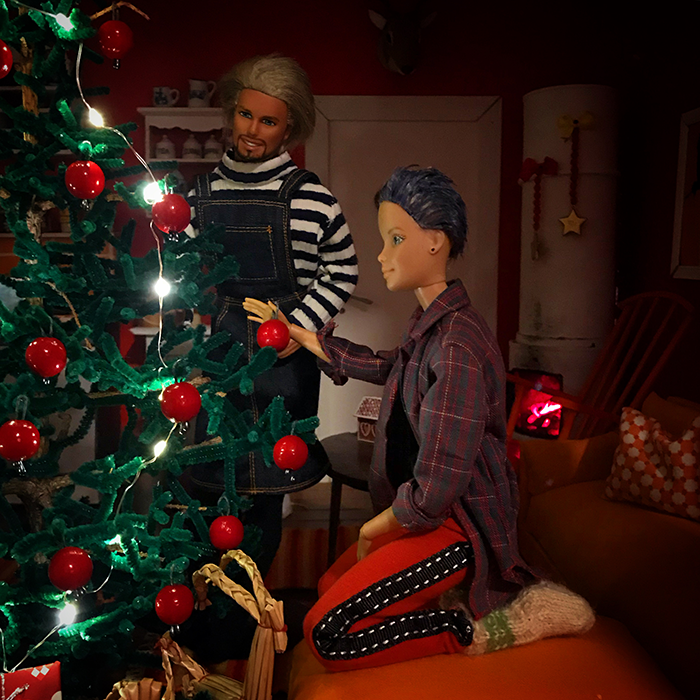 While decorating the tree, Kaarna says:- I think I’m starting to like Christmas again. - How did you celebrate in the commune?- Christmas was very christian, very religious there. Bible reading and that sort of stuff. And dozens of the family members of the leader couple arrived to have dinner. Of course we had to clean after them.- Well, here at my home it’s all pagan, but we still have to do the cleaning by ourselves, Ken laughs. 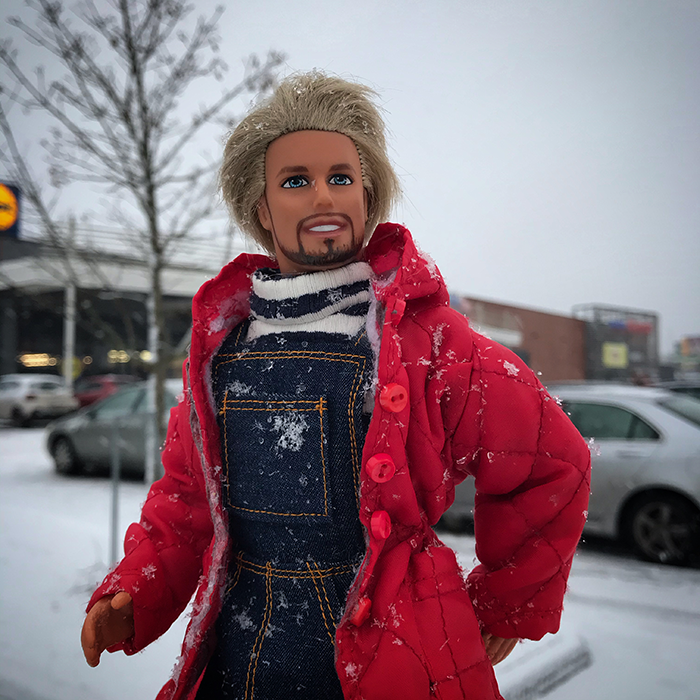 It’s finally snowing. But unfortunately it will turn into rain by the end of the day. Ken minimizes the time spent outside and runs from a store to another on his search for this year’s new Christmas ornament. 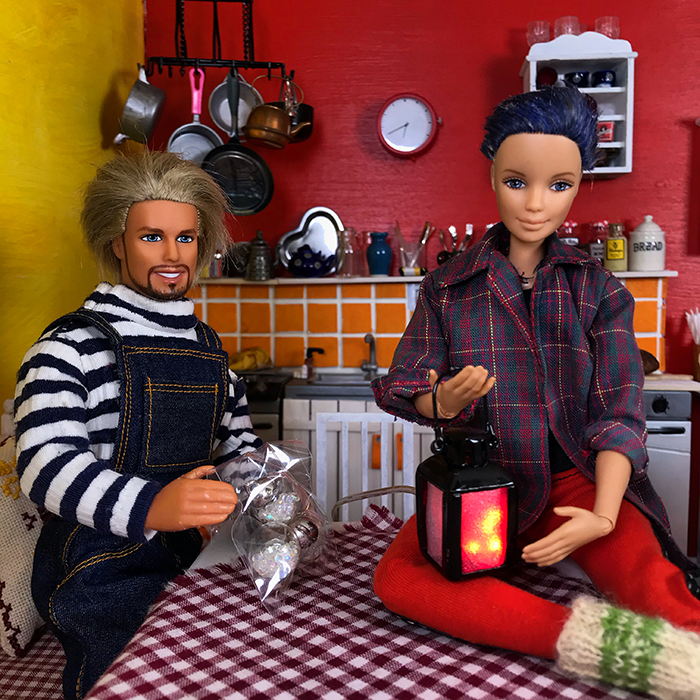 Ken bought some bling bling and a red lantern. 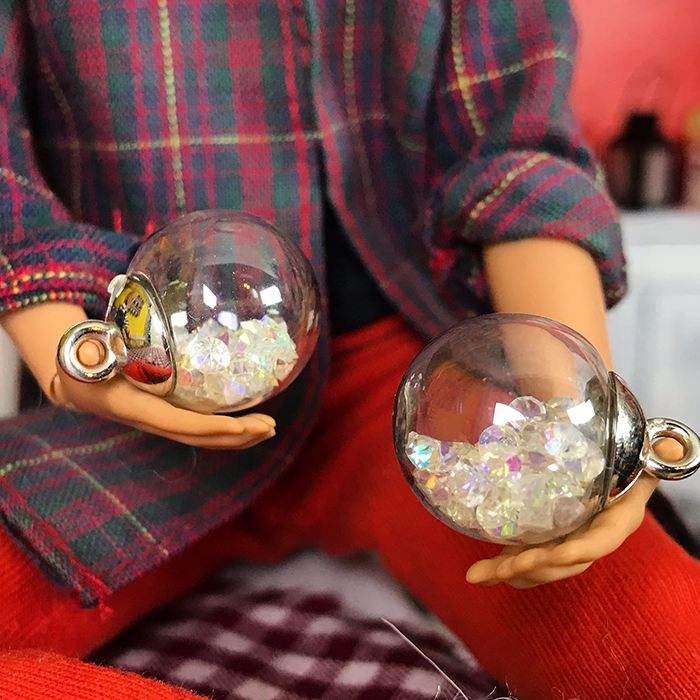 The baubles are made of real glass. 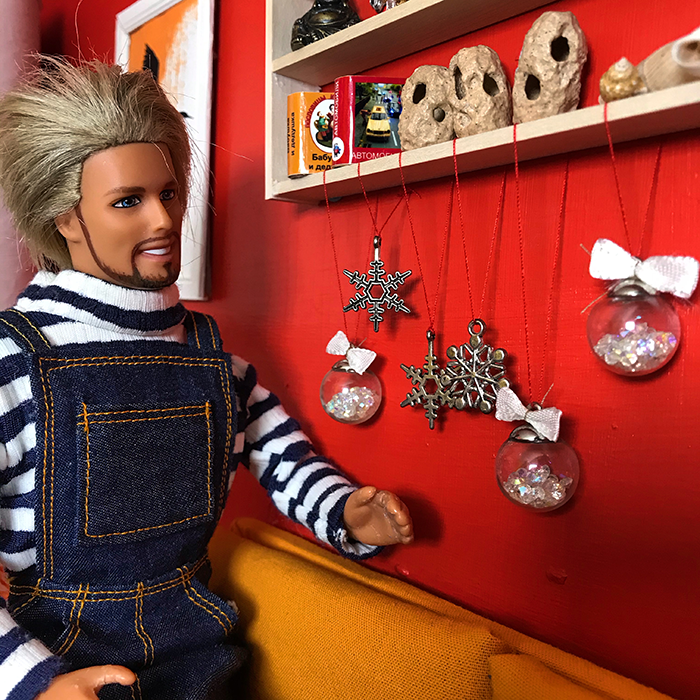 Ken hangs the new ornaments on the souvenir shelf, but he can’t make up his mind whether it looks nice or ridicilous. Bling bling might not be his thing after all. 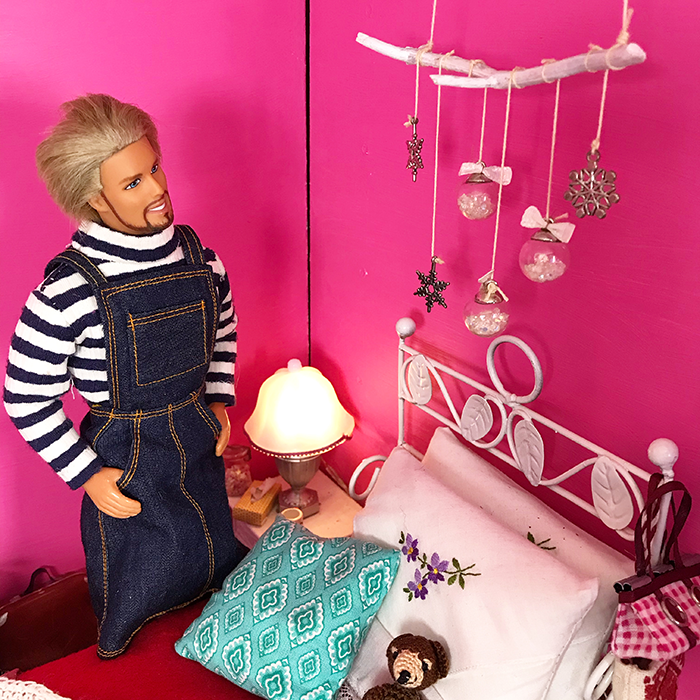 Ken slept over night and in the morning he realizes what to do with the glass baubles. - They can stay here permanently, not only during the Christmas time. I love them! 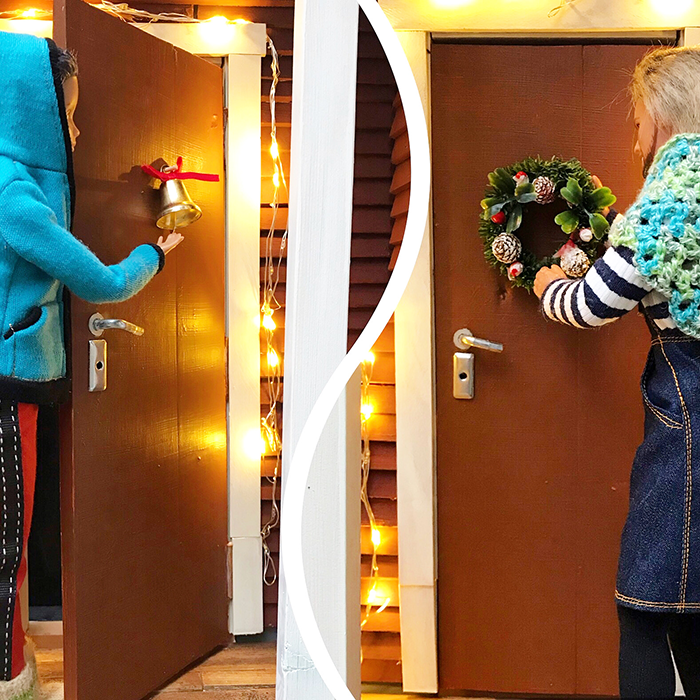 The final touch on the front doors.